It’s fine to put your own notes or feelings or ideas into a mind map that will be for your use or one which will be clearly labelled as you opinion. But, if you want to put ideas into general circulation as “facts,” you need to have done your homework and tie the information in the maps to established research, clinical findings, and expert opinion (and document whose expert opinion it is, whether that of someone else or yourself). Mind Mapping 3.0 was the introduction of high-quality data into this useful method of thinking.

I would categorize the pioneering efforts of Tony Buzan and others to introduce and popularize the method of mind mapping as Mind Mapping 1.0 and the parameterizations and resulting computer programs by ThinkBuzan, Topicscape, Mindjet, and others as Mind Mapping 2.0.

[As I saw it in 2012 and continue to view it in 2015] Mind Mapping 3.0 is the integration of computer-assisted mind mapping methods, artistic sensibility to enhance visualization, AND MOST IMPORTANTLY, substantive, creative, well-documented valid and reliable content of great importance. 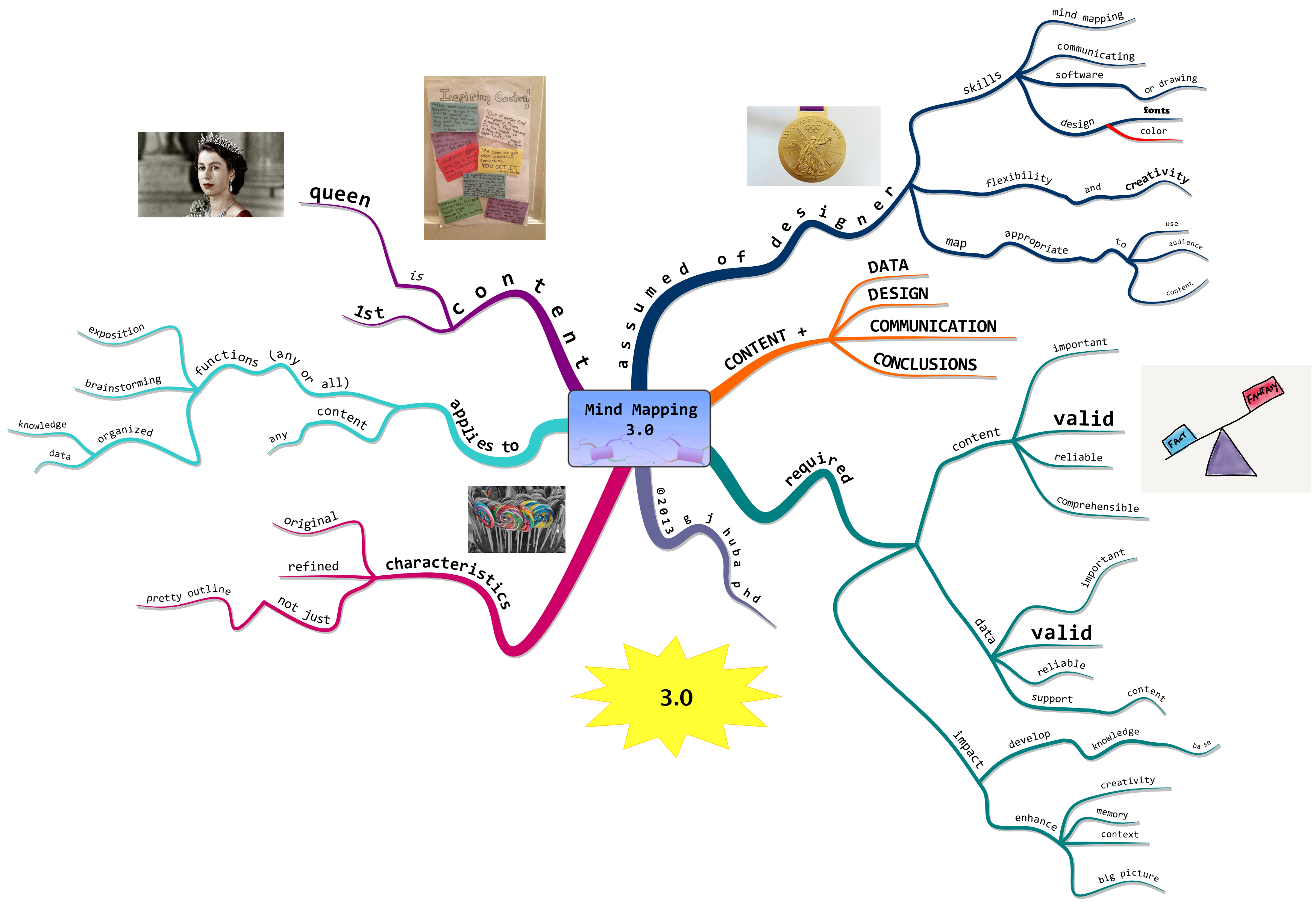 Who wins the cellular wars? It’s all about the data, dummy. And you lose.

Look around at the restaurant or on the subway or on airplanes or at bicycle riders (yup, see it a lot around here) or at store workers or person in the car next to you at the red light or in television shows and at businesspeople, teens, tweens, older adults, hospital patients, hospital doctors,  athletes, the disabled, those wearing the most trendy clothes and those dressed in all black with black hats/scarves. Data is streaming into all of their lives: email, texts, videos, music, e-magazines and e-newspapers, web sites world wide, Twitter, Facebook, Instagram, and the local restaurant’s menu. Netflix, iTunes, Amazon Prime, your bank, your doctor, your pharmacy, your local fast food purveyor, extra news and feeds from the sporting event you are attending, the latest Kardashian kamikazi komedy.

The video game is the work of the Devil.

With the exception of an increasingly small percentage of individuals with unlimited data because they were early adopters and have not changed their cellular plans, most of us are paying by the gigabyte. Those with free plans are throttled so that they really cannot use an unlimited amount of data for a fixed price so the fixed prices will go away soon.

Drop data prices, streaming will expand exponentially, the phone companies will make even more money, you will never see your friends in the flesh anymore, family dinners as we knew them in 1960 or even 1980 will be dead and replaced by family members sitting at the same table eating junk food and each watching their own data stream, and no one will want to go to the movie theater or red box anymore. Even the Columbian cocaine lords may go out of business.

Data overload will lead to data addiction and probably result in humanity evolving into the Borg Collective. We need to make some changes before Skynet and the Terminators become inevitable. I think the human race has no more than 30 years to evolve before the bytes take over. It will make the “War on Drugs” seem like the good old days and war with the Cylons inevitable. If you thought Big Pharma was going to control your life by promising the end to pain and disease, think again. Big Wireless will be even more insidious and the way Big Pharma has increased healthcare costs significantly will turn out to have been smaller than wireless when the historians look back in 100 years. Wireless data streaming is already starting to become the crack of the next decades.

Turn the Devil’s toys off when you: go home, go to dinner, watch TV, are in a meeting, are in a class, are in a place of religious observances, go on vacation, go to bed, take a shower, go into the bathroom (yup, your screaming boss may be in a toilet stall at DFW or ORD), or go to a friend’s home. Get out of the habit of pulling your cell phone out to take a picture of your family and then checking your email or Twitter account while you are at it. And stop modeling the “cellular data comes before everything else” lifestyle to your kids.

Even Spock turned the data stream off sometimes. Do so and “Live Long and Prosper.”

Know where your data come from … [or are you smarter than a sixth-grader?]

The Research by Google Era (rivaling such earlier eras as the Babylonian Empire, the Empire of Alexander, the Roman Empire, the Middle Ages Papacy, the Incan Era, the British Commonwealth,  the American Experiment in Democracy, and the forthcoming Intergalactic Federation) is here.

I think the Research by Google Era is the most “important” one yet.

Go ahead, Google it. How many minorities voted for Obama in 2008? How many times was Bill Clinton sued for “inappropriate” behavior toward female subordinates? How much money did Ghaddafi and family steal from the people of Libya? How many books are contained in the New York Public Library? What is the net worth of Bill and Melinda Gates? Their Foundation? What do they pay the Executive Director of their Foundation? Who should be credited for the “discovery” of the structure of DNA (this one is very complicated; not the DNA model but the politics about who would be credited)? How much did Mitt Romney pay in taxes? Has Mitt ever been audited by the IRS?

Think you know how many Christians, Muslims, and others are in the population of the world? Google it. Now compare the ESTIMATES from the top sources that come out of the search engine. Hhmmm. Kind of hard to tell what percentage of the world’s population is Christian, Muslim, or some other religion isn’t? [I do not hold anyone accountable for knowing the “correct” number of Jews in the world as Jews, to this very minute, are still trying to figure out who is a Jew and who gets a free pass to Israeli citizenship. Nobody has any idea how to count Russians forced to abandon Judaism during the era of the Soviet Union or Jewish dads who married a woman who is not Jewish. It goes on and on. Somehow, I suspect that if I knew as much about Islam and “Chinese traditional religion” (under the Chinese communists) as I do about Judaism and its politics, I’d be just as sure there is little consensus on basic number counts.]

Think counting religions is hard? Try getting data on the prevalence and incidence of health issues-problems.

It makes my head spin every night when I see 99% of the  TV reporters struggling to explain the error of a survey. (They use several different erroneous explanations and once in a while somebody gets it correct.) What if we were to also hold them accountable for knowing whether the information they cite is valid, reliable, biased, consistent. Wow. And I haven’t started to spout equations yet. I watch them Google for data while they are on TV and the results are often so ludicrous that they should cut power at the broadcasting tower. Wait until the lawyers figure out that they can sue for incorrect data as the result of a search and win large judgments. Maybe they will even stop suing medical doctors.

Recently a college student was in the news because he plagiarized a post on a blog and copy and pasted it onto his class-assignment blog. Along the way he changed a numbered list to a text list (presumably by pushing one key in Microsoft Word or Pages). Did he plagiarize from a world expert, someone famous, his professor? Nope. He plagiarized from an 11-year-old boy. Presumably Google helped him identify the 11-year-old as the source of the definitive information on poultry farming.

OK boys and girls. Google does not tell you a number or a conclusion or an interpretation or whether a calculation is correct or incorrect. All it tells you is that the publisher of the information on the Internet knows how to get the search engine(s) to go to that site for information on various topics. If all you do is take the data from Google and cut and paste and reformat it the term “research” does not fit. Google itself states that as their lawyers have instructed them to tell you not to trust the data uncovered by Google.

These days, if I were to believe the bio statements in Twitter and Facebook and Linked profiles, I think that it is reasonable to conclude that there are now more people working to trick Google into citing them and their advertising-laden web sites (these are the practitioners of search engine optimization, an arcane field that seems to involve a boiling pot, wand, broom, and common spices available at Walmart) as a definitive source of information than there are people working on creating valid, reliable, and original information and other data.

The Google Era for research. Don’t get too used to it. The empire will soon fall down.

And yes, apparently an 11-year-old can trick Google (and a college student) into thinking he is more of an authority on poultry farming than the US Department of Agriculture or any university agricultural professor or any science writer at a major newspaper. And yes, both the sixth-grader and the college student failed to mention anything about inhumane poultry production practices, genetically engineered turkeys and chickens, and the use of antibiotics in over crowded production areas. Guess Google did not tell them to write that. Or think that such problems are ones worth thinking about. That’s OK if you are in sixth grade, although it is kind of sloppy. College? Lucky for him that pro football does not care about chickens.