Simply put, Donald Trump has been waging a biological war against the residents of the United States (and the war) for all of 2020. Or, if you prefer, you can call the same behaviors a fundamental lack of understanding science combined with a distrust of public health experts and misguided priorities made because of conflicts in interest between what is best for the world (minimizing the effects of the coronavirus pandemic) and the financial and electoral benefits to the President and his family.

President Trump did not inform us of the arrival of a deadly virus into the United States until two months after our Intelligence Community confirmed it existed in China and was deadly. Our public health and medical communities knew it would be extremely deadly unless the Federal government took immediate and decisive action. Some of the best medical and public health professionals told President Trump that he needed to take immediate action and that if he did so a huge number of Americans and residents of other countries could be saved from COVID-19 infection. He did not acknowledge the coronavirus until two months later. He was, however, dumb enough to tell Bob Woodward in a telephone interview being recorded that he was lying to the world’s people.

Trump did not use our national stockpile of medical supplies in a fair and equitable way for all 50 states, instead pitting what he called “red” and “blue” states against each other. In the USA, maps color states that typically vote Republican as red, and use blue for the majority Democratic voter states. Trump continues to contend that blue states should not receive federal assistance. [In response I have been informed by a reliable source in the Office of the Creator that 97% of the founders of the USA are rolling around in their graves after being informed of Trump’s comments and the remaining 3% have been re-assigned to hell.]

Trump is still telling American residents that he did a great job managing a fight against the invading coronavirus. Today (9/21/20) he gave himself an A+ for his handling of the coronavirus at his press conference. Instead of telling the truth, he continues to lie to the public, refuses to use our federal tax dollars to pay for medical and social services, denies that the virus existed and later that it got out of control, and refused to listen to medical, public health, and logistical experts.

Trump has many tools and weapons to protect us from the invading virus. Instead, he allows it to attack us. Through negligence Trump allowed the virus to kill more than 200,000 of our citizens through September 21, 2020. Current projections include a worst-case scenario of 600,000 dead Americans by January 1, 2021.

I consider Trump’s actions to be biological warfare against the people of the USA and secondarily the rest of the world. I also consider his handling of the COVID pandemic to be criminal, impeachable, and morally reprehensible. If your views are not the same as mine you can call him incompetent, stupid, a liar, and unwilling to consult experts. Either way, there are still 200,000 (most needlessly) dead confirmed and probably many more not identified accurately as COVID-19 victims on their death records. If Trump continues as he has been in not dealing with COVID effectively, another 400,000 could die before the end of the year. 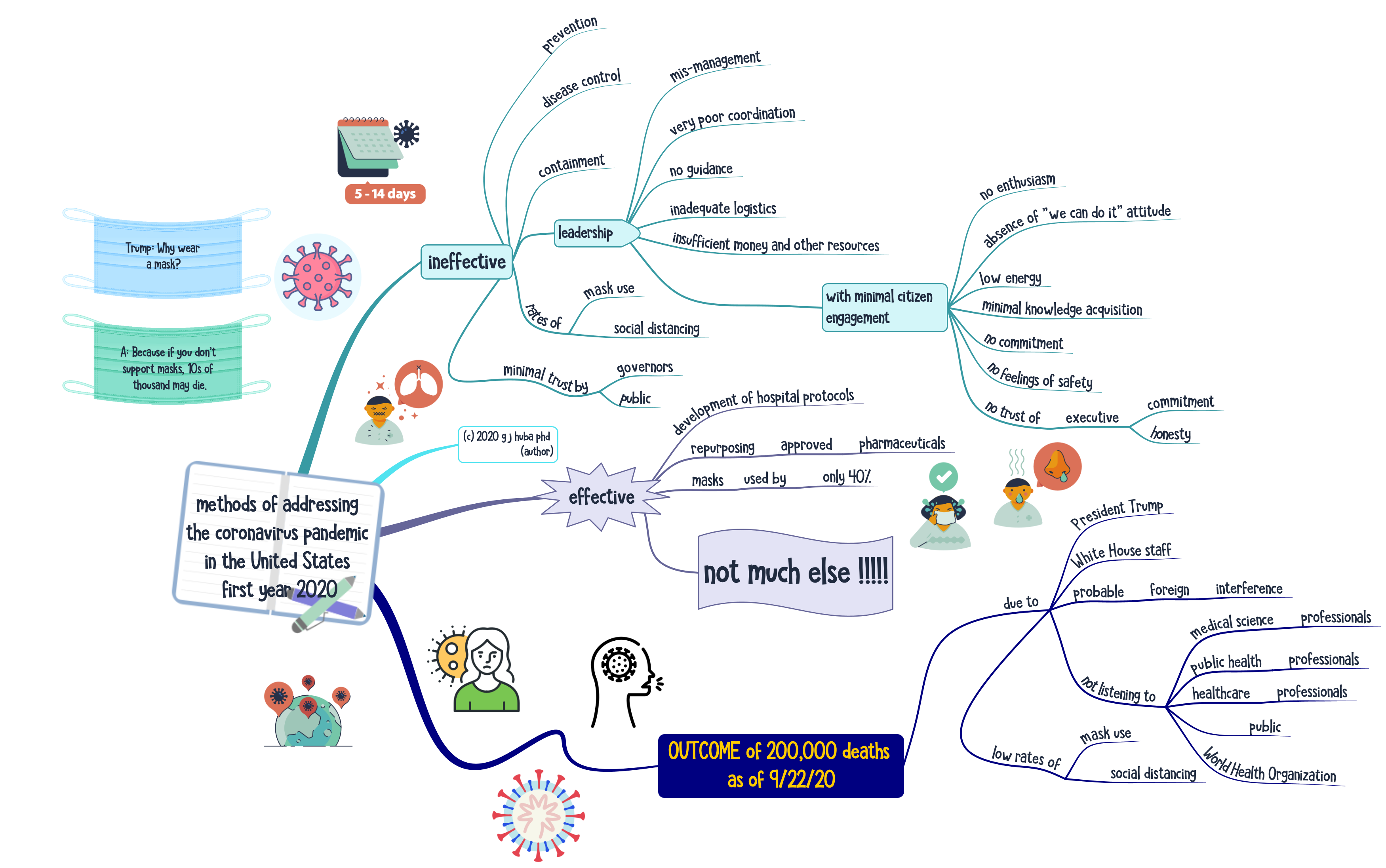 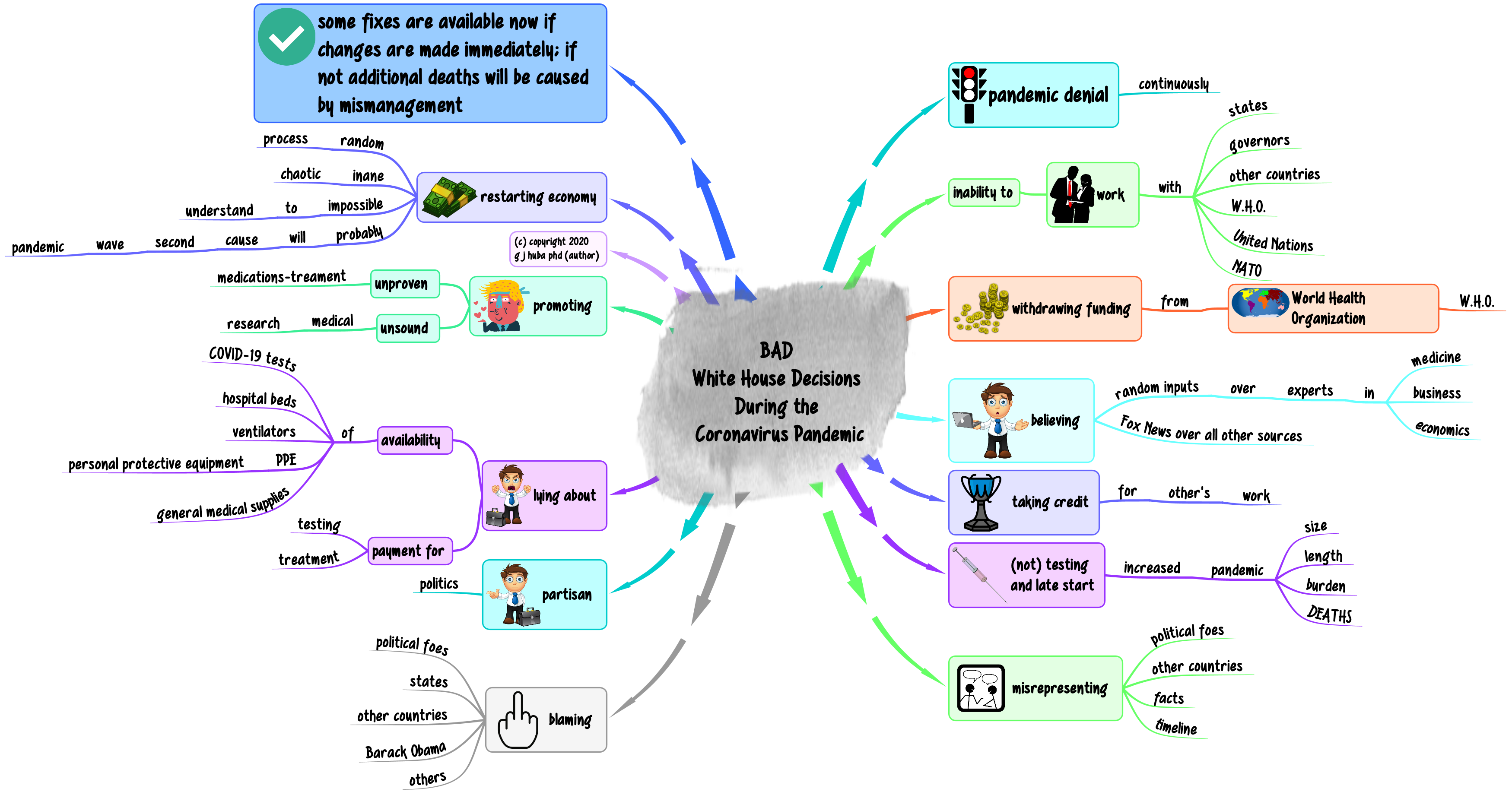 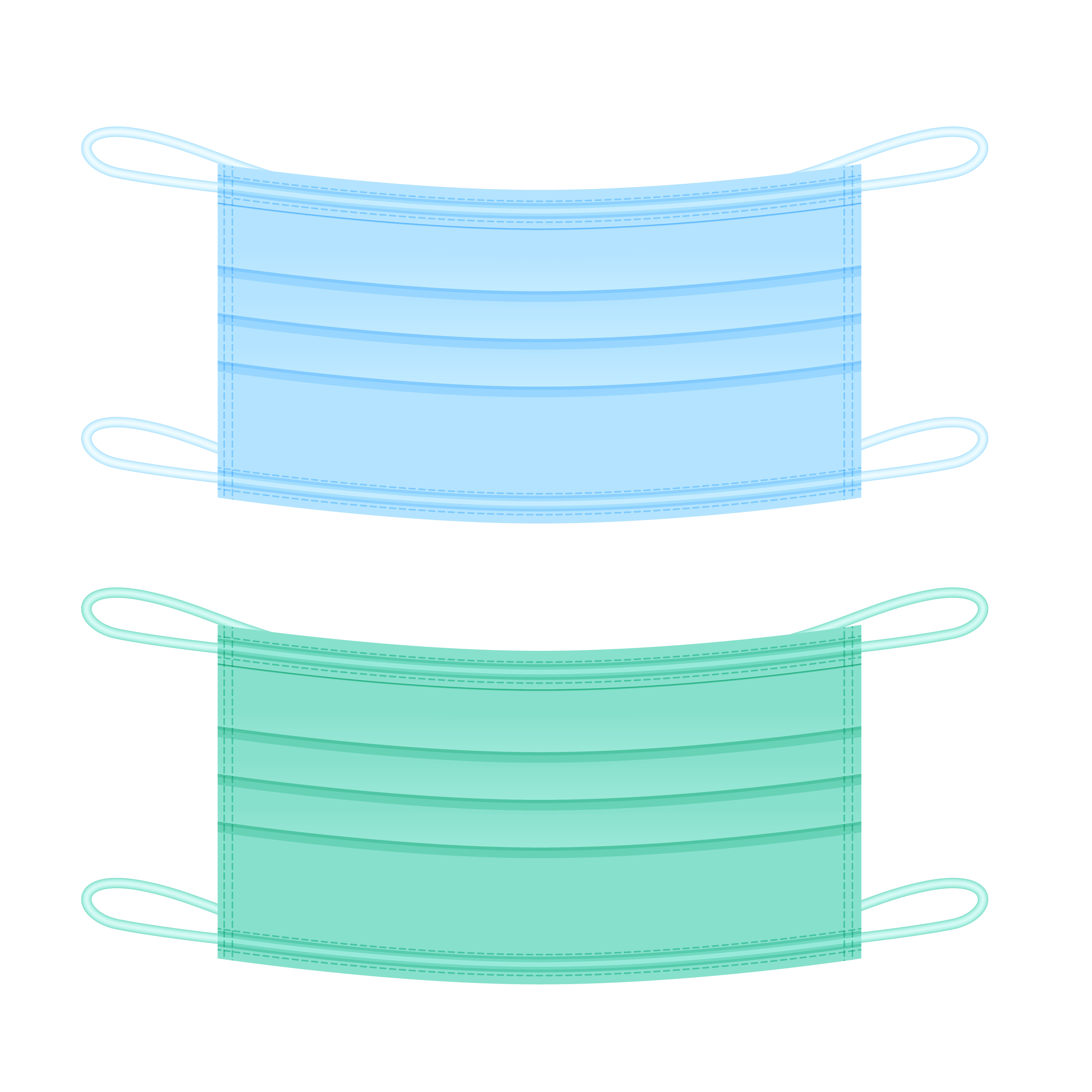 Trump never wears a simple cloth face mask that dramatically cuts the likelihood that others will contract COVID-19 from him when he is in public places.

Trump was repeatedly asked to wear a mask to model behavior that could have saved tens of thousands of lives. He refused to do so in public because (as reported widely in the media) he felt that it would make him look weak.

Then he broke down and wore a mask two times for photo opportunities.

He returned to refusing to wear a mask at large events, often without social distancing. To the time of this writing, he has repeatedly screamed at his followers during his political pep rallies that masks are not really needed.

I just lived for the past six months in “stay-at-home” conditions because of the COVID pandemic. I also am living with dementia and my residence is a health-care living complex regulated by the State of North Carolina.

As usual, I developed a mind map over the past few weeks to summarize what the issues were (are) in dealing with both of these “problems” at the same time.

Most of the information is best explained by the mind map below because it shows, in a summary fashion, what it meant to deal with the pandemic. Here are some bullets to cover things. 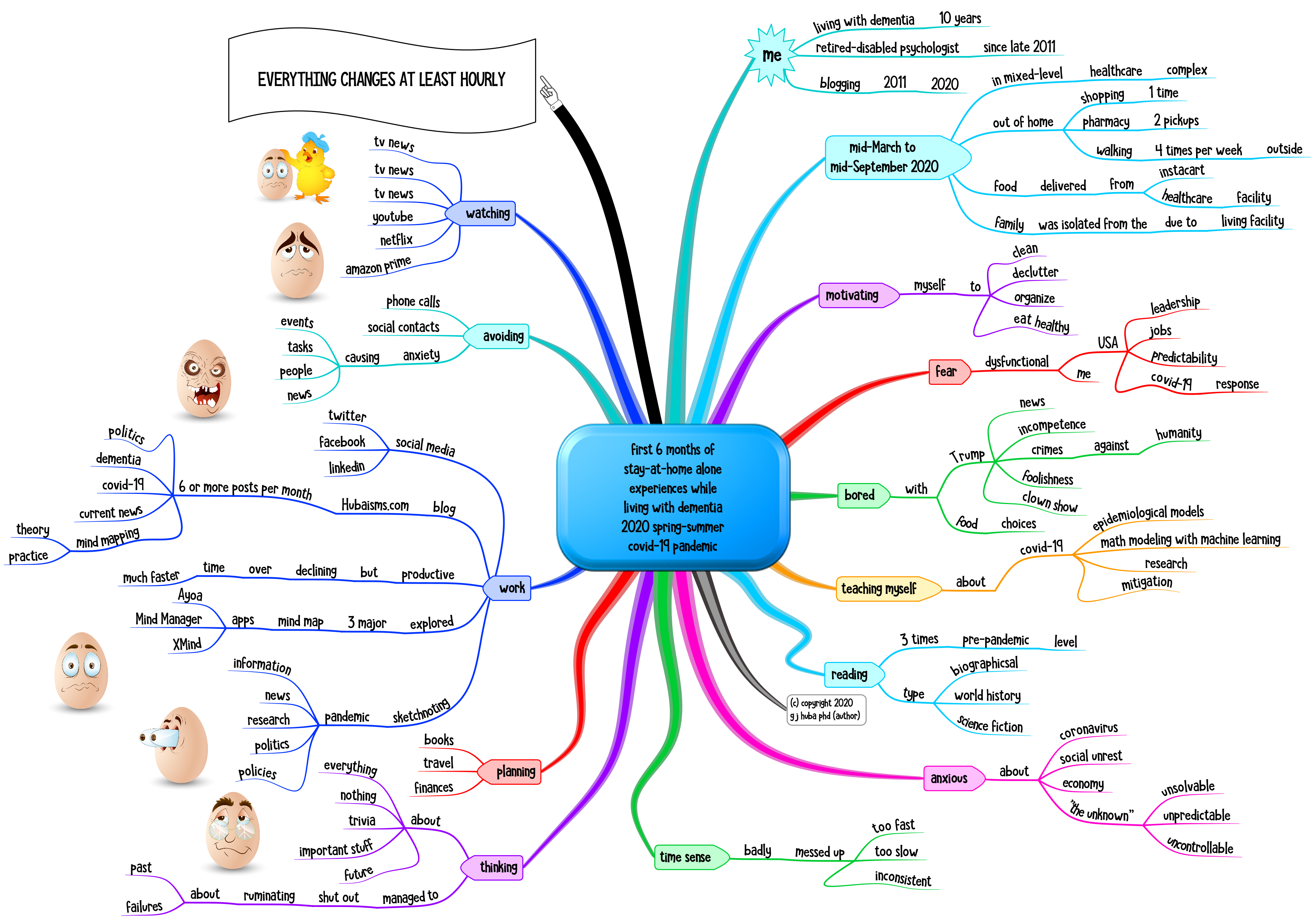 Sections of the mind map. Same map as above.

Donald Trump and his grumpy band of trolls have ruined more parts of the US government’s infrastructure than I ever thought was possible.

The carnage they created in 3.5 years would typically take your regular incompetent president at least 35 years to “accomplish.”

A small review of the low points since January 2017.