VEDTEFS has come to public health, or more accurately erased from public health “thanks” to the Trump administration.

The brilliant comedian George Carlin had a routine in the 1970s about “10 words you can’t say on the radio.” Carlin’s schtick has of course been made irrelevant in the 21st century since you can now say all of those words – and many more similar ones – on top 40 radio and on TV.

As reported in the Washington Post, those pathetic and mean clowns in the White House have now developed a list of seven words you cannot use in official reports at the US Centers for Disease Control, one of the world’s premier medical and healthcare research and public health agencies.

THOSE SEVEN WORDS ARE CRITICALLY IMPORTANT TO DESCRIBE A SCIENTIFIC APPROACH THAT LOOKS FOR TREATMENTS THAT HAVE GOOD OUTCOMES. SERVICES SHOULD BE MADE AVAILABLE TO VULNERABLE POPULATIONS, OF A DIVERSE NATURE, AND INCLUDING SERVICES FOR THE HIGH NEED ISSUES OF TRANSGENDER INDIVIDUALS AND FETUSES. STATE-OF-THE-ART HEALTHCARE AND ACCESS TO IT SHOULD BE ENTITLEMENTS AND A UNIVERSAL RIGHT FOR ALL THOSE IN THE USA.

Apparently Trump has been paying attention to Stalin, Hitler, and Putin, all of whom have banned words, books, and plays to control and brutalize their populations. And they have increased conflicts among citizens by allocating services to only the richest and most powerful people in their countries.

I rearranged the words in the order VEDTEFS so that you have an acronym to help remember what Trump wants you to forget. 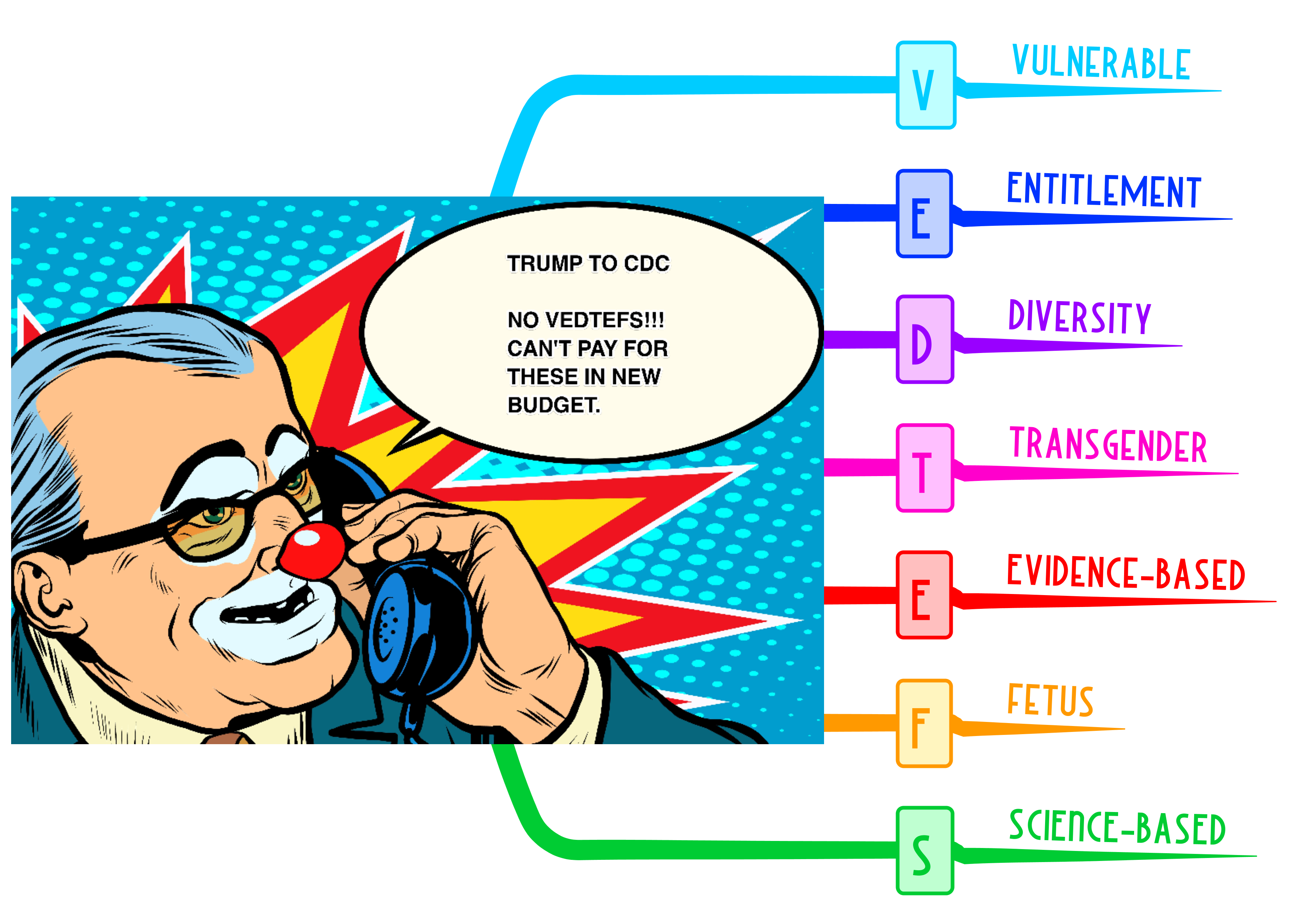 George Carlin’s famous X-rated monologue on the 7 words you can’t say on television greatly influenced my generation. One of the high points of the career from a comedian who did much to make us reassess cultural boundaries and censorship.

Carlin’s monologues are obscene by many people’s definitions. Don’t click on the videos if you are upset by extreme obscenity like that in the top 40s songs of the 21st Century.

From where I sit, Trump’s list of forbidden public health words at the CDC is just as obscene that presented by Carlin.

Note. The word ban at the CDC was extensively discussed in the worldwide media on December 16, 2017. If you would like to see the media discussions of the ban, a simple Google search will yield hundreds of results.