Fonts are a preview of what text will say before you even read it.

Most major corporations have proprietary fonts that you will often recognize before you even read the text.

And then the two dozen fonts — mostly nonstandard hand-printed ones — that I use in my mind maps to establish a personal style and project creativity and organized chaos and at times fun, seriousness, childhood, absurdity, and authority.

Fonts are a huge design element often overlooked in designing mind maps. In addition to having more or less clarity, they can project seriousness, friendliness, anger, laughter, fun, excitement, love, the old (early fonts from early printing presses, typewriters, historical documents like the US and French Constitutions, World War II posters, old bar signs), road signs in the USA, international road signs, passports, scanners, bank numerals, individual characteristics (such as fonts based on the handwriting or printing of Freud, Leonardo, Abigail Adams, John Quincy Adams, Middle Age monks, Frank Lloyd Wright, Einstein), and those evocative of The Old West, the 1800s, the Great Depression, various wars, the 1920s, the 1930s in Germany, the 1960s, the 1970s, and the ubiquitous smiling, frowning, angry, joyous, clueless, and cool yellow dots invented by Forrest Gump 🙂 while he was jogging for a few years. Gump of course also invented the phrase “shit happens” in the same scene from the movie, but that is a separate story.

I’m not here to teach a class in font selection as there are numerous books on the topic.

Realize however, that matching fonts to other design elements in a mind map as well as its content and audience and images can greatly increase the effect of the map on encoding, retention, brainstorming, creativity, and communication.

Here are some examples of the same mind map in various font and color combinations. Not only are some more or less “readable,” they also at times evoke different emotions, motivations, and reactions.

When I create mind maps I usually write the title and a few branches in a default simple font like Arial and then try as many as dozen variations before selecting one that most matches my intent for the map. As I near the end, I then go back and look at the earlier and various other alternatives before settling on a final font.

Font selections are very important. The font can draw your attention before you read the words. Or bore you once again and curb your enthusiasm.

Changing the fonts in the mind map is the easiest way to change its appearance and to make it more readable and understandable to  various audiences.

Click on mind maps to expand their size. At the bottom of the individual maps — differing only in the font — are the same maps presented as a self running slide show. 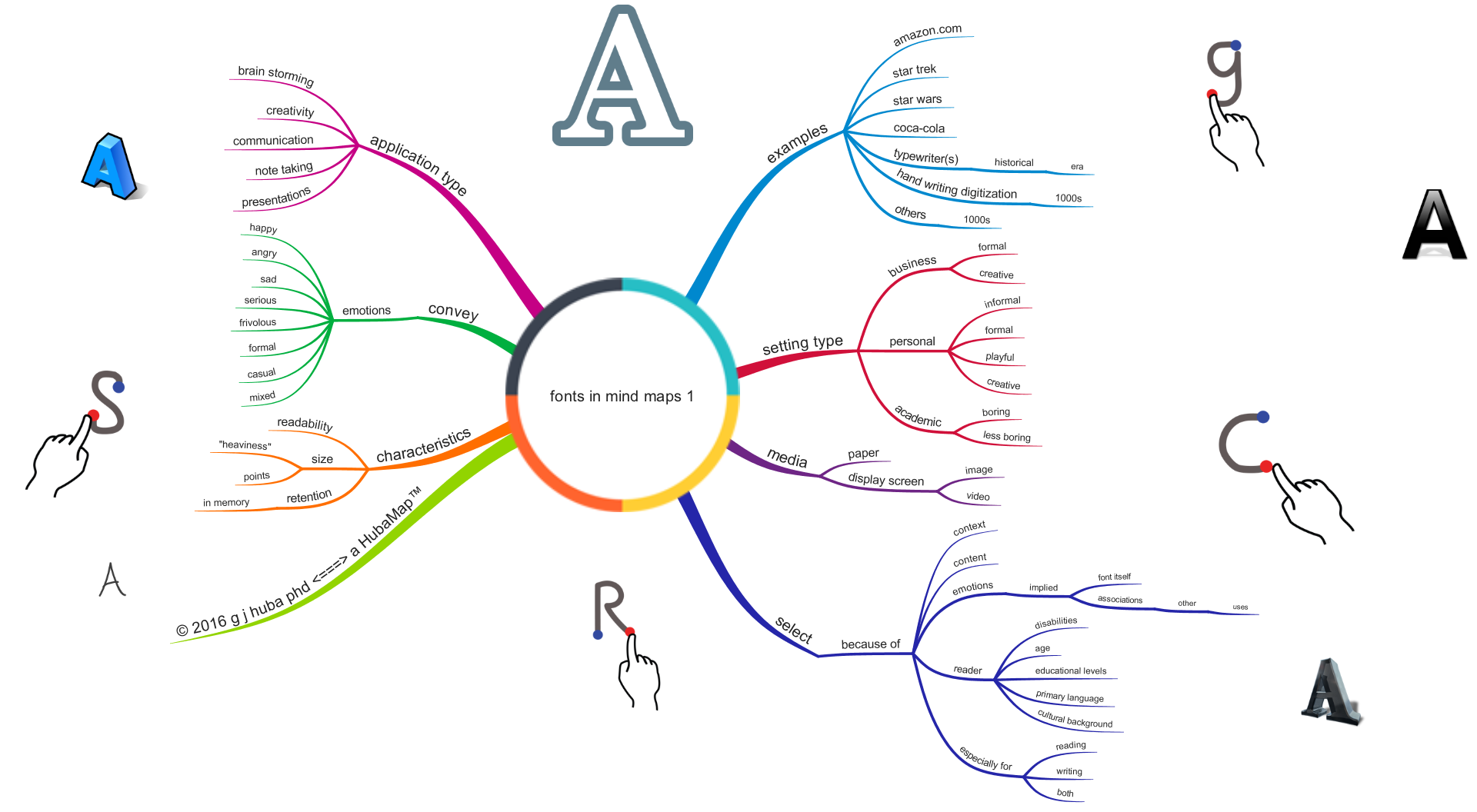 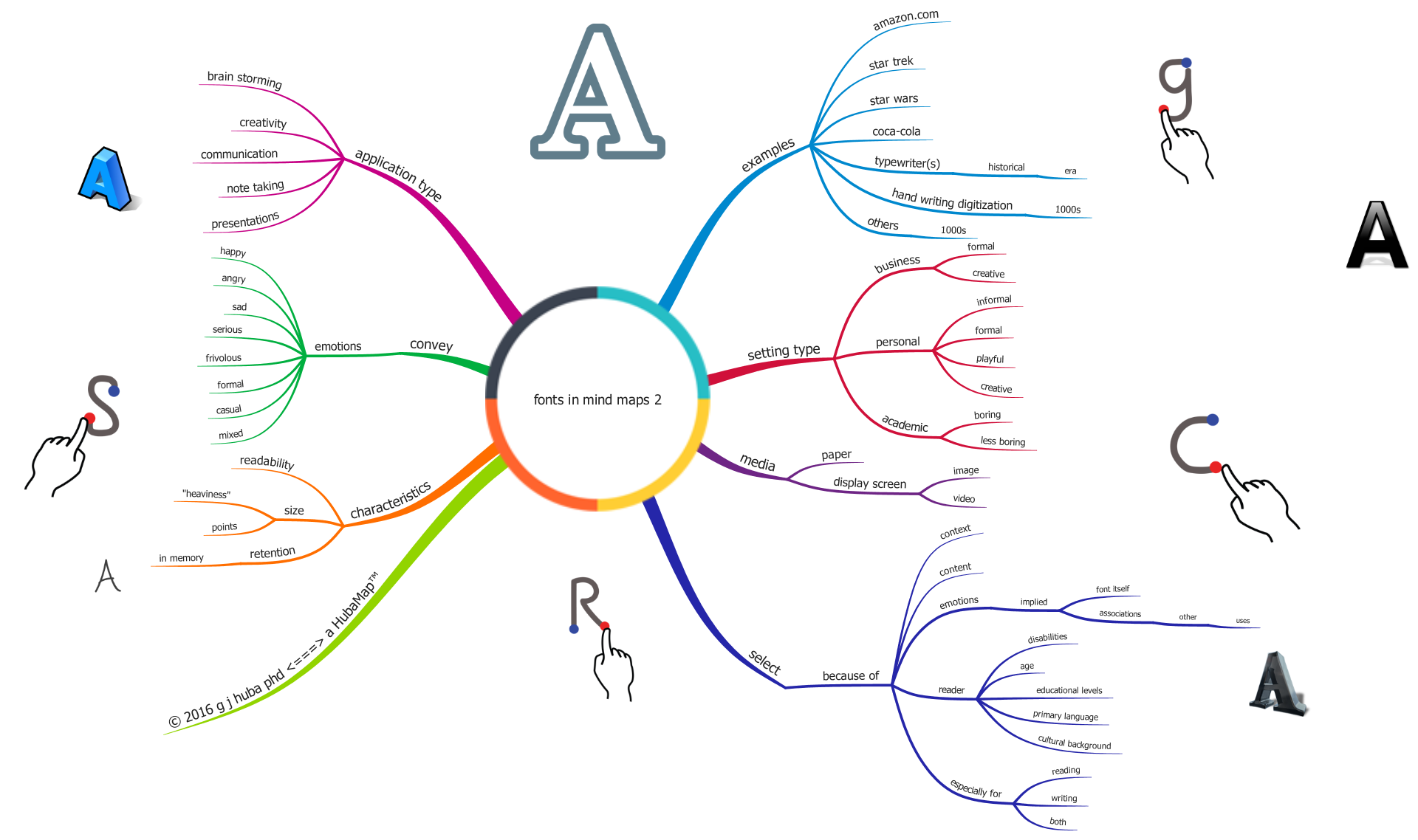 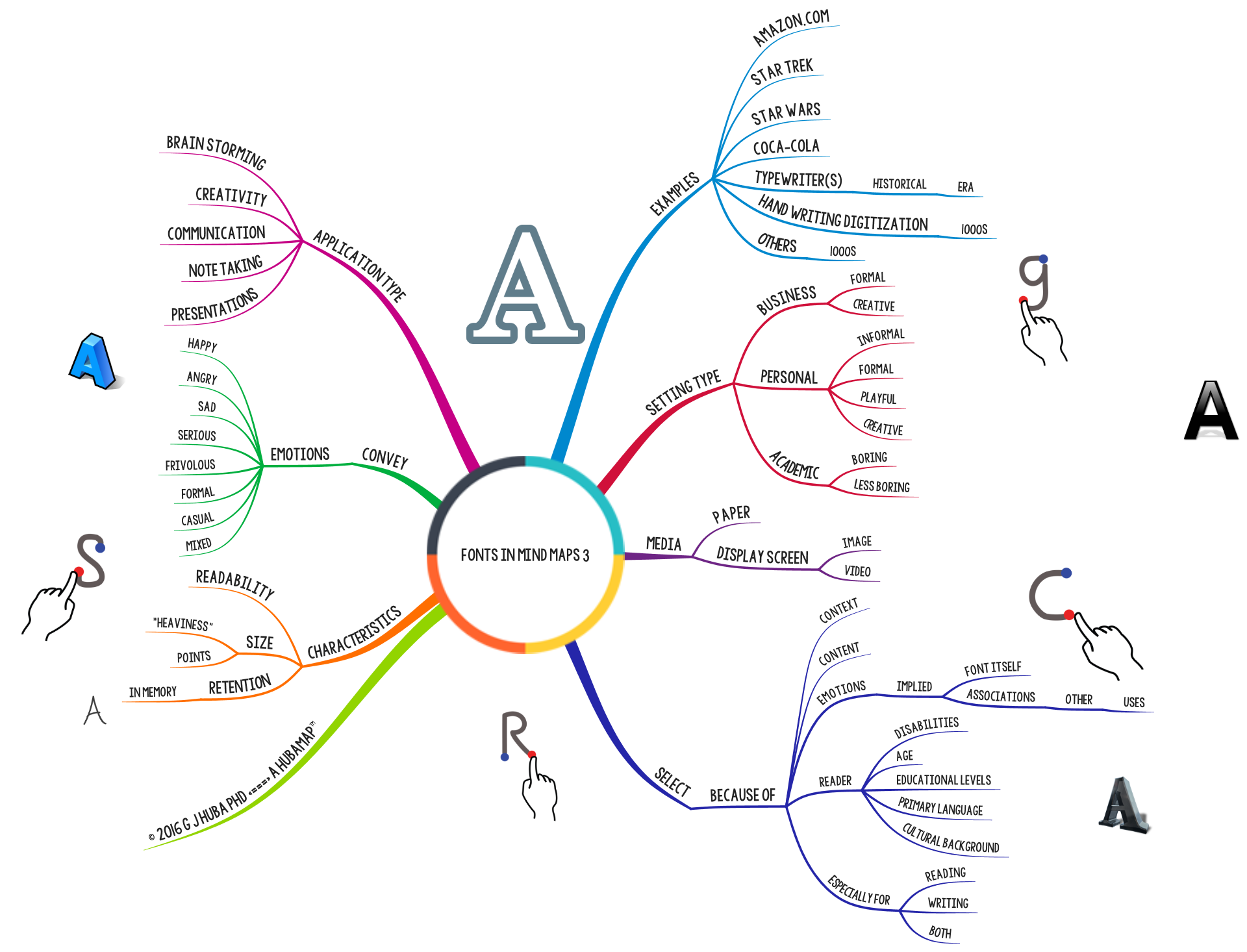 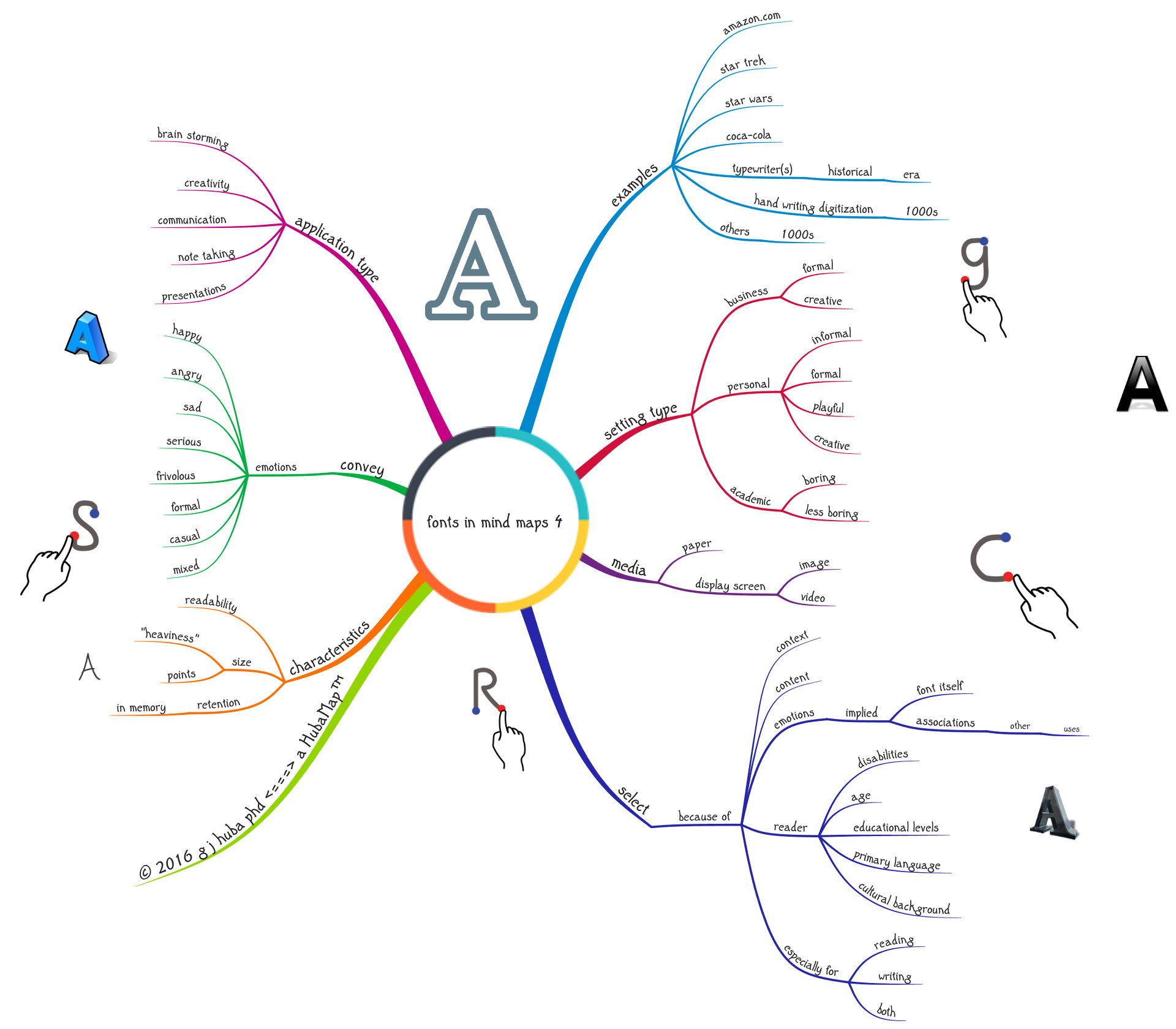 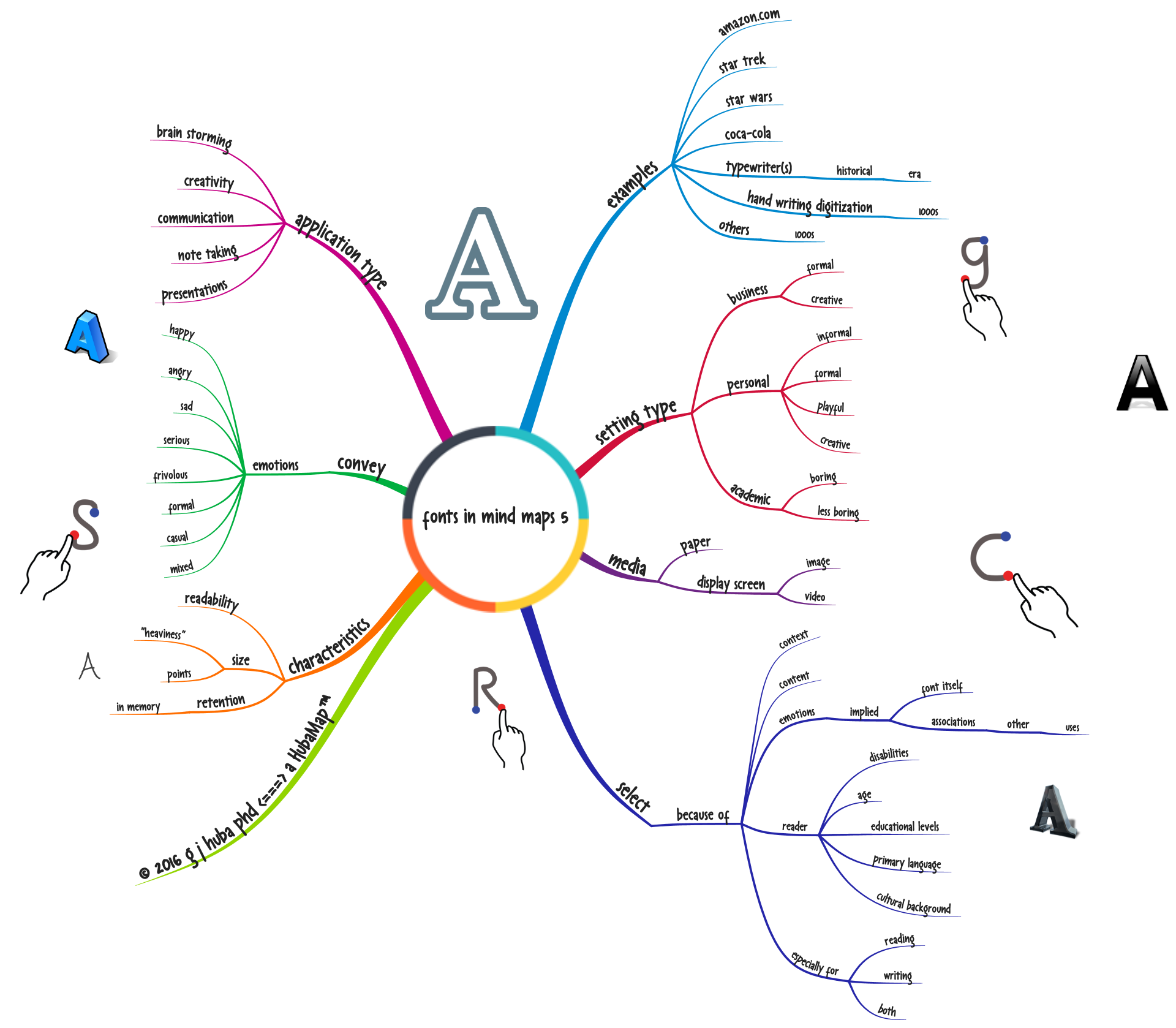 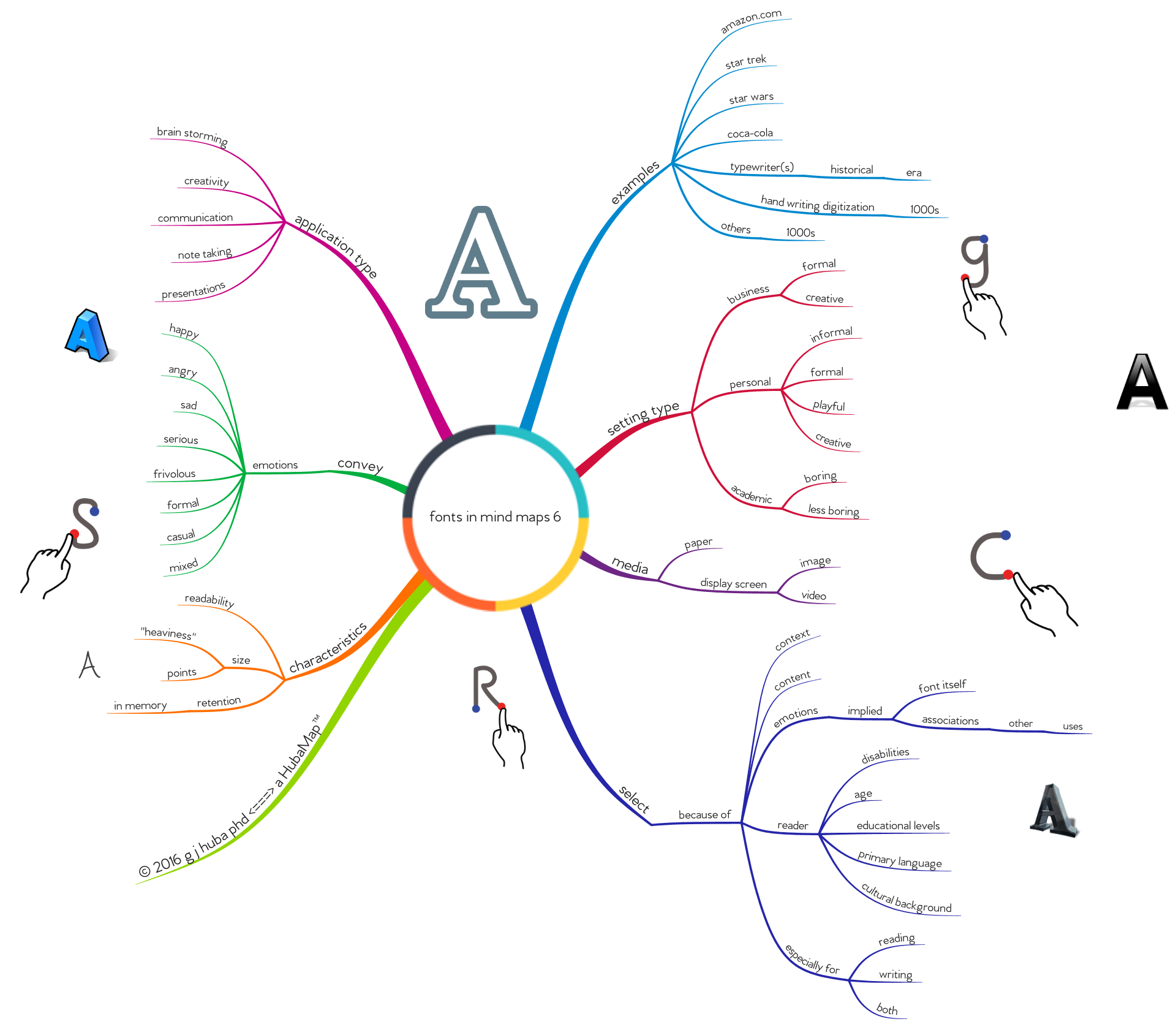 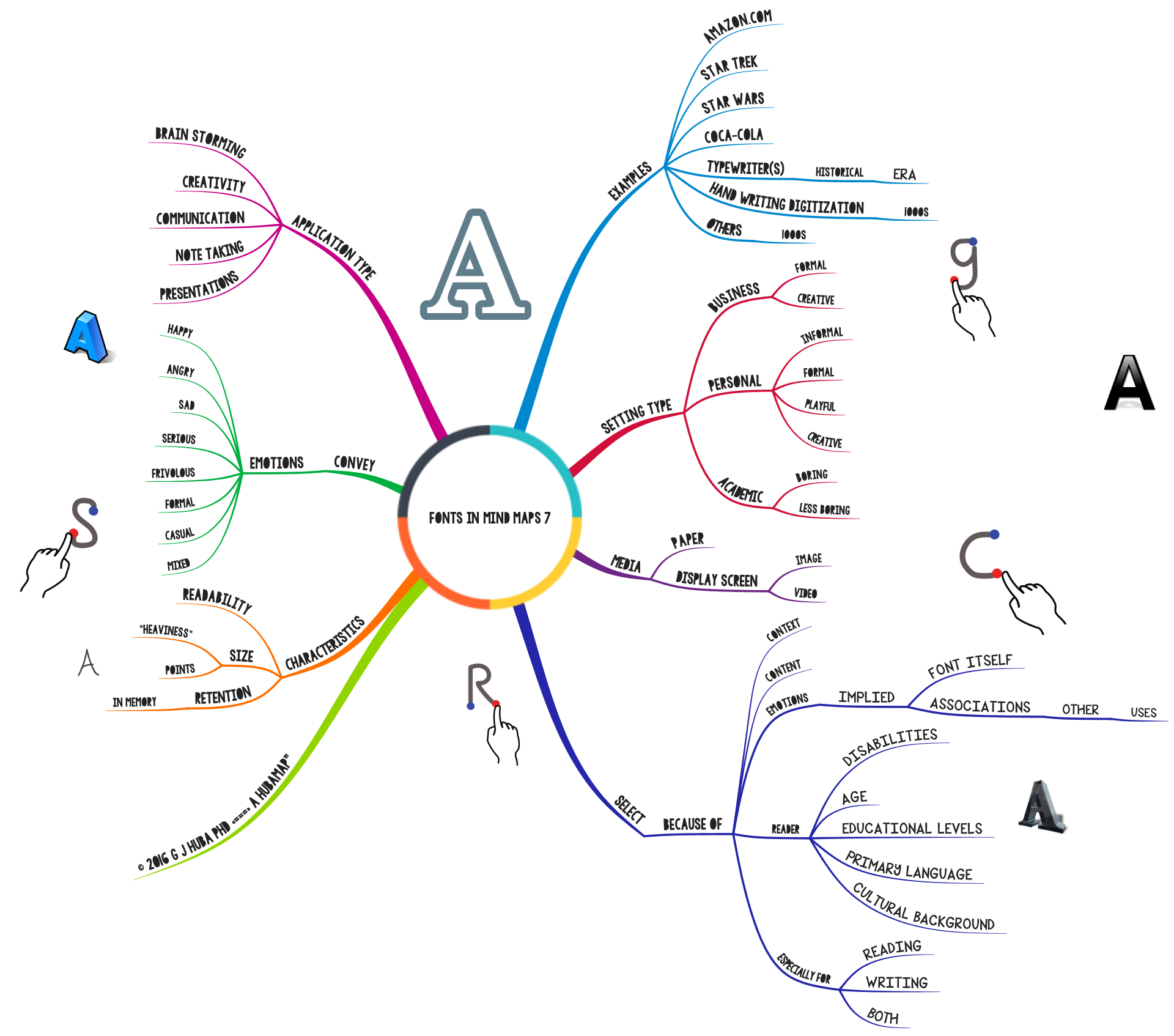 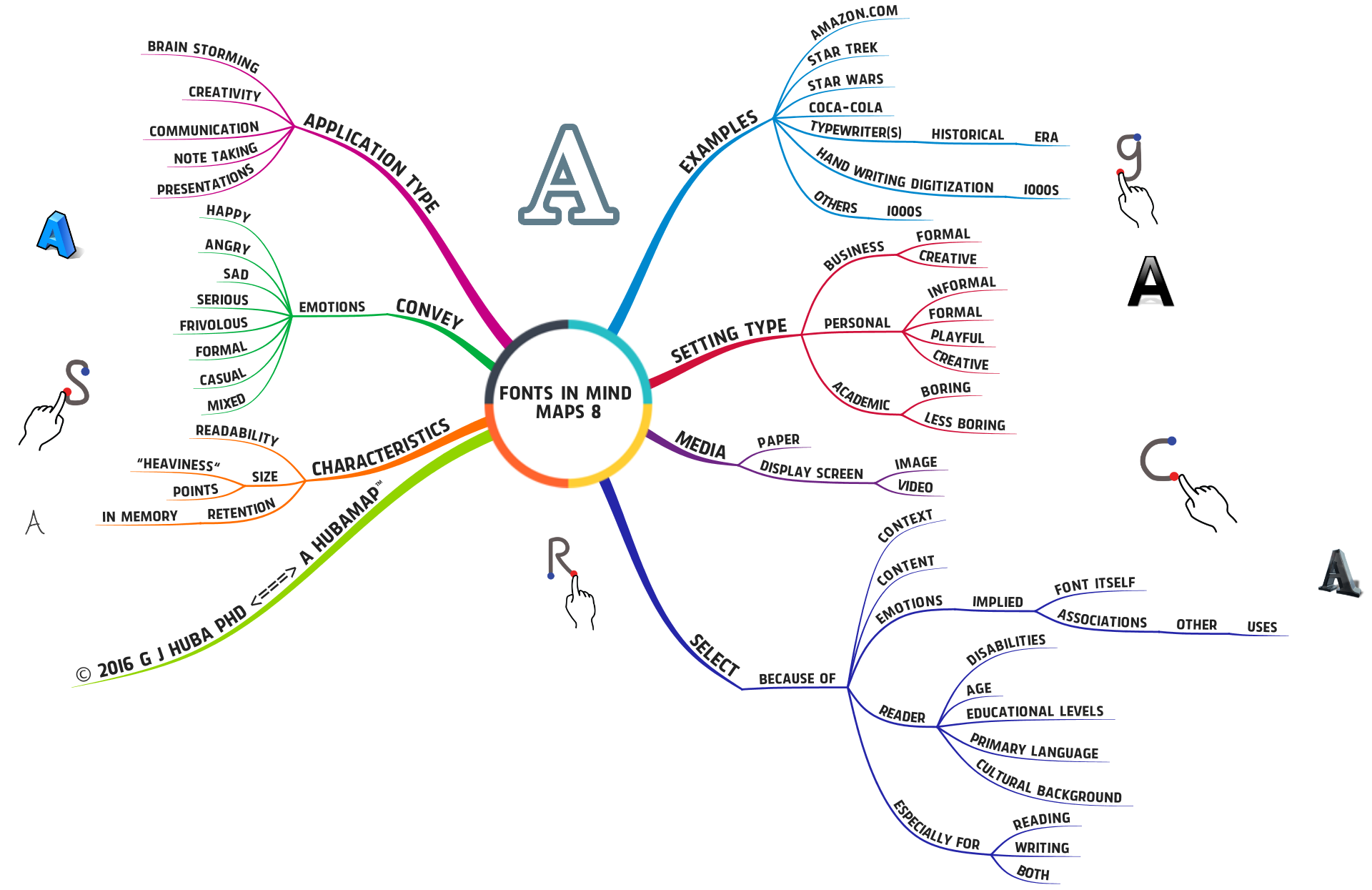 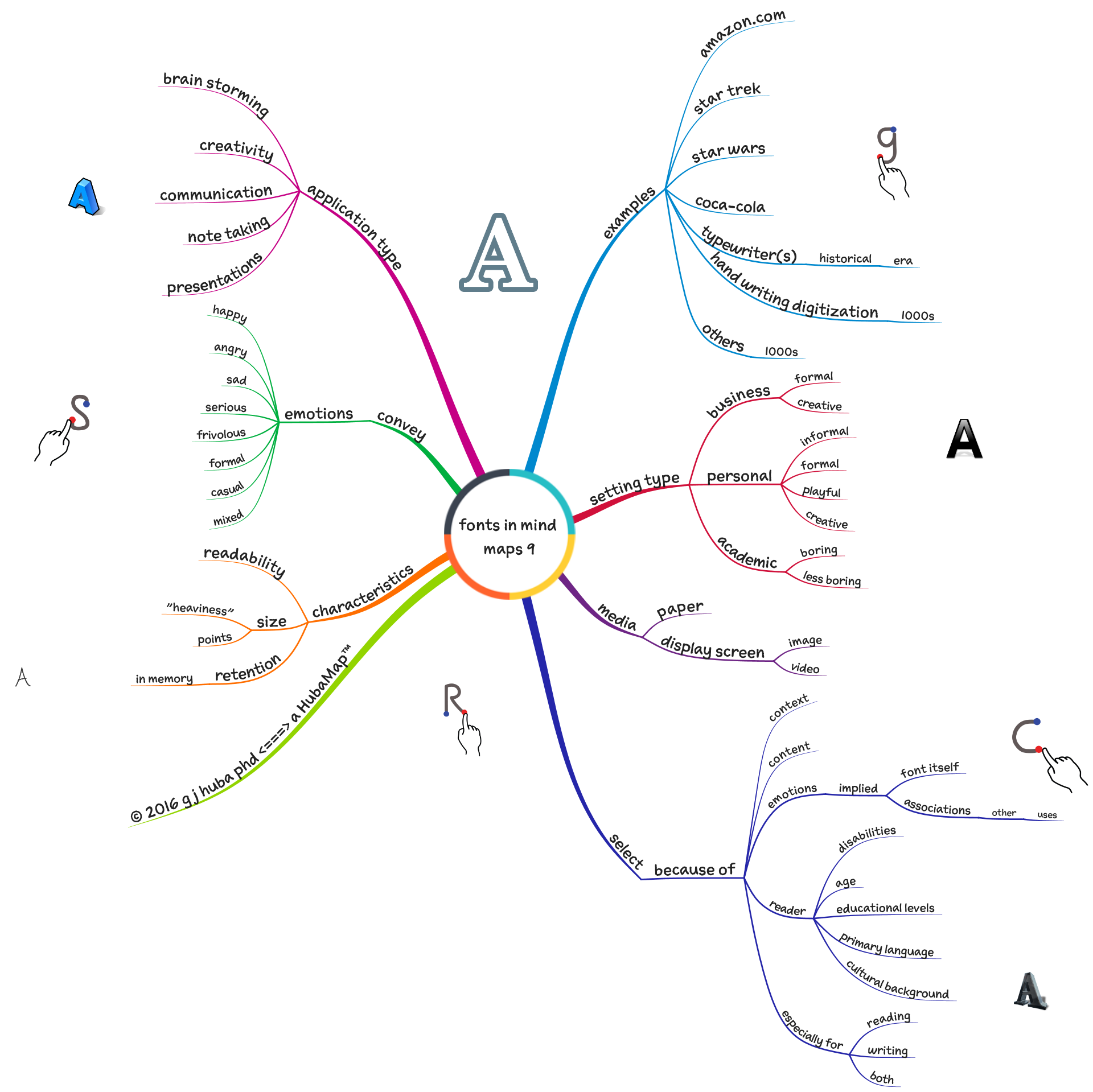 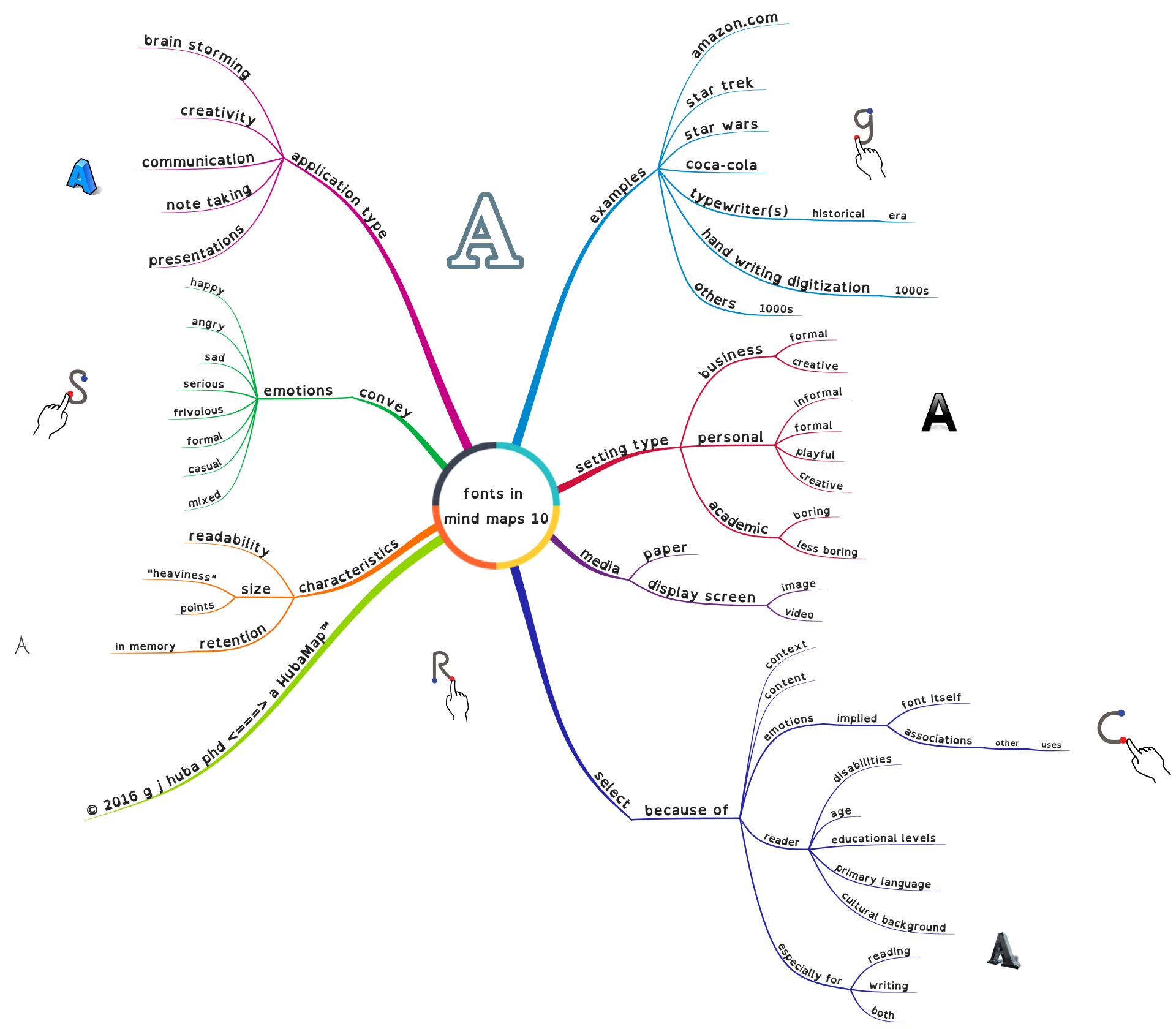 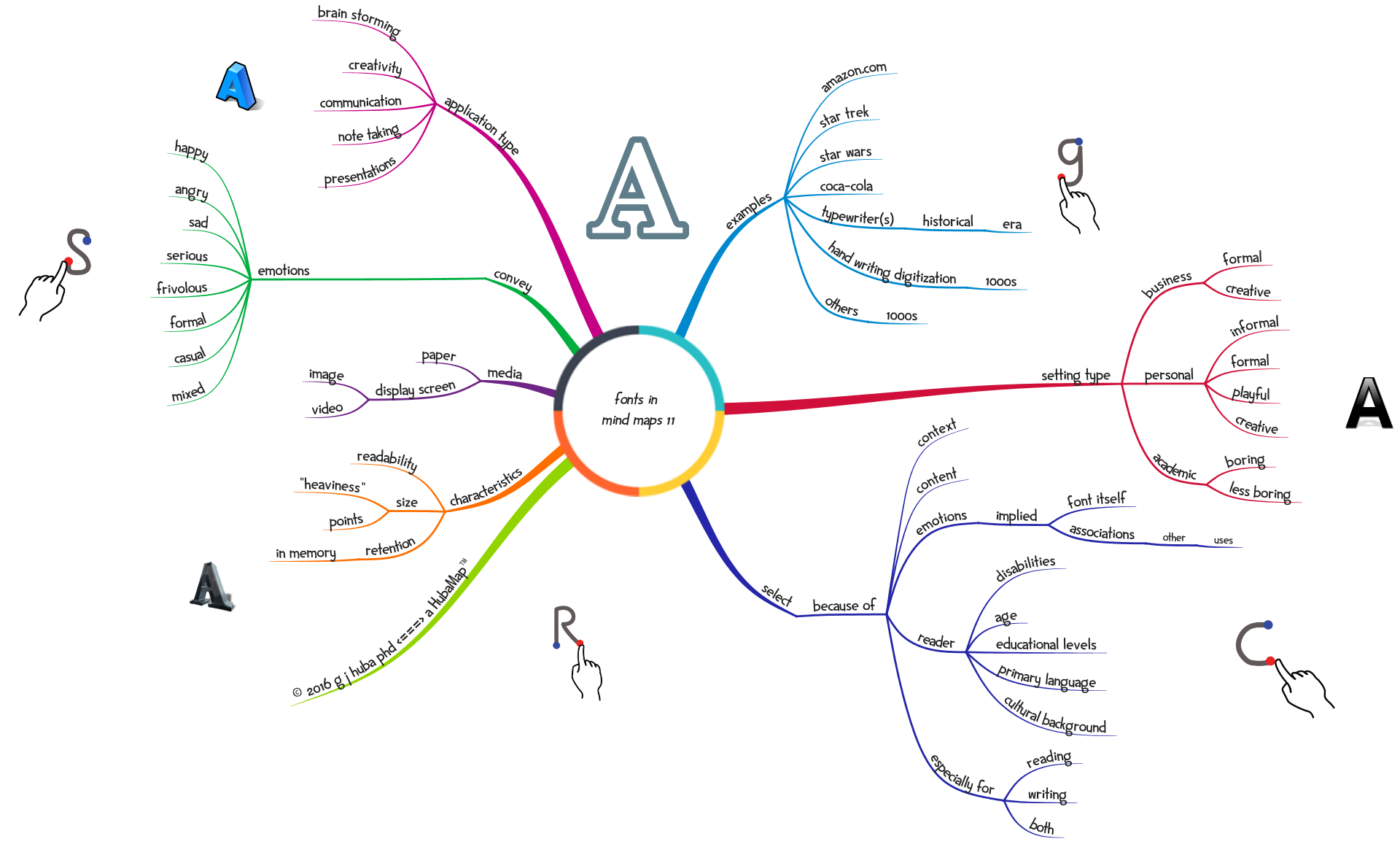