Click here for an index of all blog posts on Huba’s Integrated Theory of Mind Mapping.

Tony Buzan’s most controversial rule for mind mapping is to use one word per branch. People ignore it, hate it, complain about it, call such maps words I do not care to repeat here, love it, create with it, blame it, and look at other alternatives.

I find Buzan’s branches with short labels of one word to work pretty well to generate pretty pictures, and to work extremely well in mind maps being used to facilitate brainstorming. You can use this rather blind rule and obtain mind maps that work fairly well. But not as well as they could especially if you factor in the observations of many that most people find it far more confusing to read branches labelled with Buzan’s rigid format.

In the beginning of my theoretical work a couple of years ago, I thought that Buzan’s rule was the best one for labelling branches and channeling the thought process. Over the ensuing years I have come to realize that Buzan’s rule and its resultant maps are too restrictive, promote verbal rather than visual thinking, and become “stringy” especially with curved branches that most people will not understand as well as a mind map labelled with concepts (constructs, summary ideas), many of which require several words to disambiguate.

In the general case, the rule of one word per branch (OWPB) does not work very well in most applied knowledge applications. Medical diagnoses are named with more than one word explaining how they categorized or caused, Oscar-nominated films are named with labels indicating their content and setting and historical period, and complex naming rules apply to great baseball shortstops, serial killers, books, stressors, rewards, people on the street, and great vacation resorts.

If you use the Buzan rules, you are basically focusing on words as you try to find places to put single words to collectively describe some complicated idea. Buzan’s rule reinforces the idea of word dominance rather than picture-visual dominance! If you put one concept on each branch (with several words needed to describe many concepts), you are focusing more on the underlying concept (a visual datum) and not a specific word.

Huba’s rule of one concept per branch supports true visual thinking about concepts that can be pictured. It promotes integration and understanding and theory. Diagrams are better labelled with a full concept than labelled with several successive branches of individual words as Buzan would have us do.

Here are some more thoughts in the form of a mind map. Click on the image to expand it. 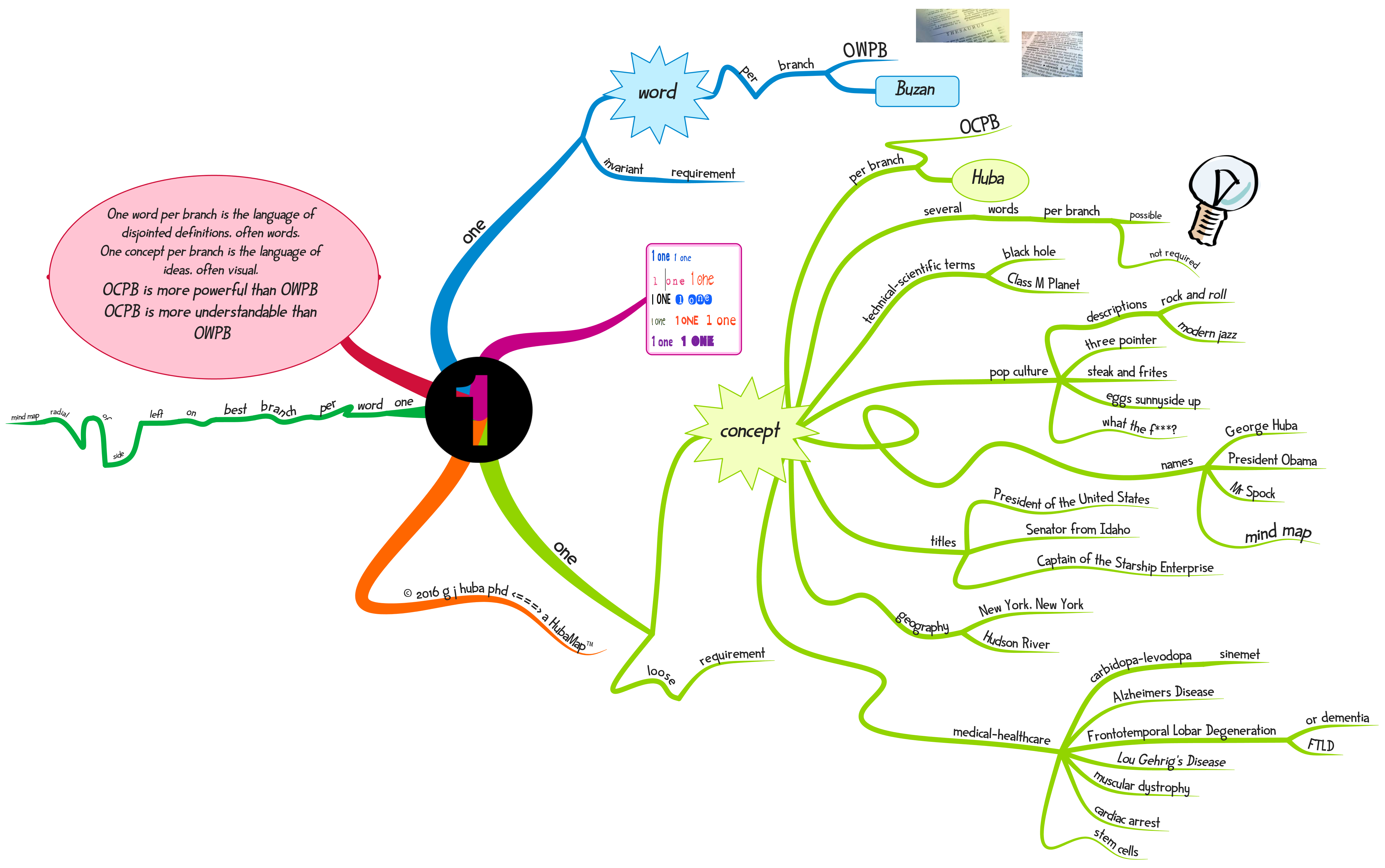 Why does Buzan’s theory fall apart at the idea of one word per branch rather the more correct and useful representation of one concept per branch. I believe it is because Buzan’s original rules of mind mapping from the 1970s and 1980s are based upon a digital model of the brain’s data processing functions (a set of “on/off” switches or those little pixels in your computer monitor that turn off and on to represent a picture in full color) that was commonly misused from the 1950s through the 1980s, and still is even today. The brain and its workings are analog. Lots of information “clumps” together rather than being a bunch of on/off switches in various locations. Analog devices use “degrees of on” to convey information as contrasted to a discrete one/off, yes/no digital device. Also, information is blended from many different sources and brain locations to construct the information as a concept or idea or map within the brain. More precisely, the brain is a stochastic device that mixes multiple neurons firings (primarily digital inputs or sources of information into a more analog continuous form) in part by accounting for a random component of erroneous information added due to a number of conditions (including brain disease effects). Or you can call it an analog device that makes probabilistic predictions. Or you can just say that it is much more complicated than the assumptions underlying Buzan’s one word per branch rule.

In order to maximize the usefulness of mind mapping and to promote greater use for such important issues as dealing with dementia and other medical conditions, personal and professional planning, decision making, communication of visual ideas big and small, learning, theorizing, remembering, and many more, we need to maximize the usefulness of the visual thinking model underlying mind mapping and move to the concept (construct, image based) system of constructing mind maps.

The decision about how to label the ideas in a mind map (whether by labelling them with single words as Buzan requires as opposed to single ideas I call constructs or concepts) is the most important one that is made in mind mapping.