I’m not stoopid, darn it. I just have dementia.

Ok, I may not remember your name unless I knew you years ago. I get confused when people speak to me, especially in loud and noisy settings or when I miss a word or two and cannot “fill it in from my archival storage.” My spelling is getting bad and my words shorter, although I will point out that I have spelled stoopid intentionally incorrectly for more than a decade. I tend to avoid social situations not only because they are confusing and I cannot screen simultaneous conversations from one another and have no awareness of either my tone or volume of voice and thus may decline an opportunity to go to a reception at the White House next week which for me would be a once in a lifetime event. I can usually spell arithmetic, but sometimes not; I probably look up the spelling of 50-100 words per day on Google when I am answering email or blogging or tweeting, but somedays I can spell a word and later not be able to spell the same word. I tweet dozens of times a day to 100,000+ followers but have to look up all but a dozen twitter IDs if I want to send a message to an individual. I do these incredibly complicated mind maps to make my ideas accessible to more than I could using words. I do not remember when TV programs I have liked for years air but have solved that problem with a DVR. And a lot of people who have to interact with me each day think I am dumb or slow or stupid and show it in their behavior toward me. Others are quite kind and understanding.

How do you think the the ones who think I am slow or dumb or stupid would react if I said, “I’m not stupid, damn it. I just have dementia.”

I’m not stupid, damn it. I just have dementia.

AND I HAVE ADJUSTED TO DEMENTIA IN MANY WAYS.

Let me repeat the whole message.

I’m not stupid, damn it. I just have dementia. AND I HAVE ADJUSTED TO DEMENTIA IN MANY WAYS.

Don’t treat others whose behaviors are “odd” or are judged by observers to “have Alzheimer’s” or another dementia as if they were dumb or stupid. Many are quite aware of at least of part of the behavior around them but may not express emotions nonverbally anymore or gaze at you while you are talking or respond in the words you expect.

They are not stupid, damn it. They just have dementia. And many adjust to dementia in many ways.

I was smart enough to put “darn” in the title to this post rather than “damn” as I suspect many of you find the euphemism more acceptable and my preferred original wording disrespectful. I personally use the phrase “damn it” to honor my grandfather, a proud New Englander who hailed from Vermont. Sort of like Bernie Sanders without Bernie’s tremendous social enlightenment (it was a different time when ignorance became bigotry and he had little religious tolerance but no racial intolerance at all and was a proud unionist).

I have a PhD degree from one of the best universities in the world and even though that does not guarantee I am not dumb or incredibly stoopid, it was necessary to be able to spell and speak coherently and add simple numbers and do fourth grade word problems in order to get the degree. I used to be able to remember hundreds of phone numbers and never had to carry an address book. Now I may not remember to call you back. But I am still aware enough to say to Siri or Alexa “what is 4227 – 3101” after I use a calculator to check myself and my fingers. And I hate any computer program that does not have a built-in spell checker. I need that spell checker a lot and it is not because my fingers do not work well.

I’m not stupid, damn it. I just have dementia. And I adjust to dementia in many ways.

I am quite aware that people respect me because of my writings on social media (although they may think I am a jerk because I espouse too many liberal causes, believe in letting Syrians and any others practicing Islam or those from Middle East origins into the USA just like any other people, and thinking a Trump presidency would be a coronation and disaster). People on the street may not see me as much more than a prematurely old-looking man, not always well-dressed and freshly shaved, walking looking down so as not to fall, and who asks you to repeat many sentences because he does not understand you the third time you say something.

I am spending more time now at a local community that features in-home and multistage assisted living of various kinds. Sometime soon I will move in there because it is time, although I do not need much assistance now nor should I for a while. At lunch and walking around I see lots of people who cannot figure out the lunch menu at times (I am included) but can discuss their former high profile careers (many were university professors at UNC and Duke), the looniness of Donald Trump, and favorite classical composers while not knowing how to get somewhere across town. Tomorrow they may not remember my name or the conversation (I forget names but remember conversations) we had yesterday until at some time they say, “Oh you were the guy I was talking to about the UNC basketball game when we were here yesterday.” And, although Donald Trump seems to be quite a topic of conversation at times (usually in proximity of a television set when CNN is on) among those I identify as having significant cognitive impairment/dementia, I have yet to hear a single person say anything nice about the man. Certain types of wisdom seem to stay with you.

They are not stupid, damn it. They just have dementia. And they adjust to dementia in many ways.

We are not stupid, damn it. We just have dementia. And we adjust to dementia in many ways.

A few thoughts in a mind map. Click on the image to expand it. 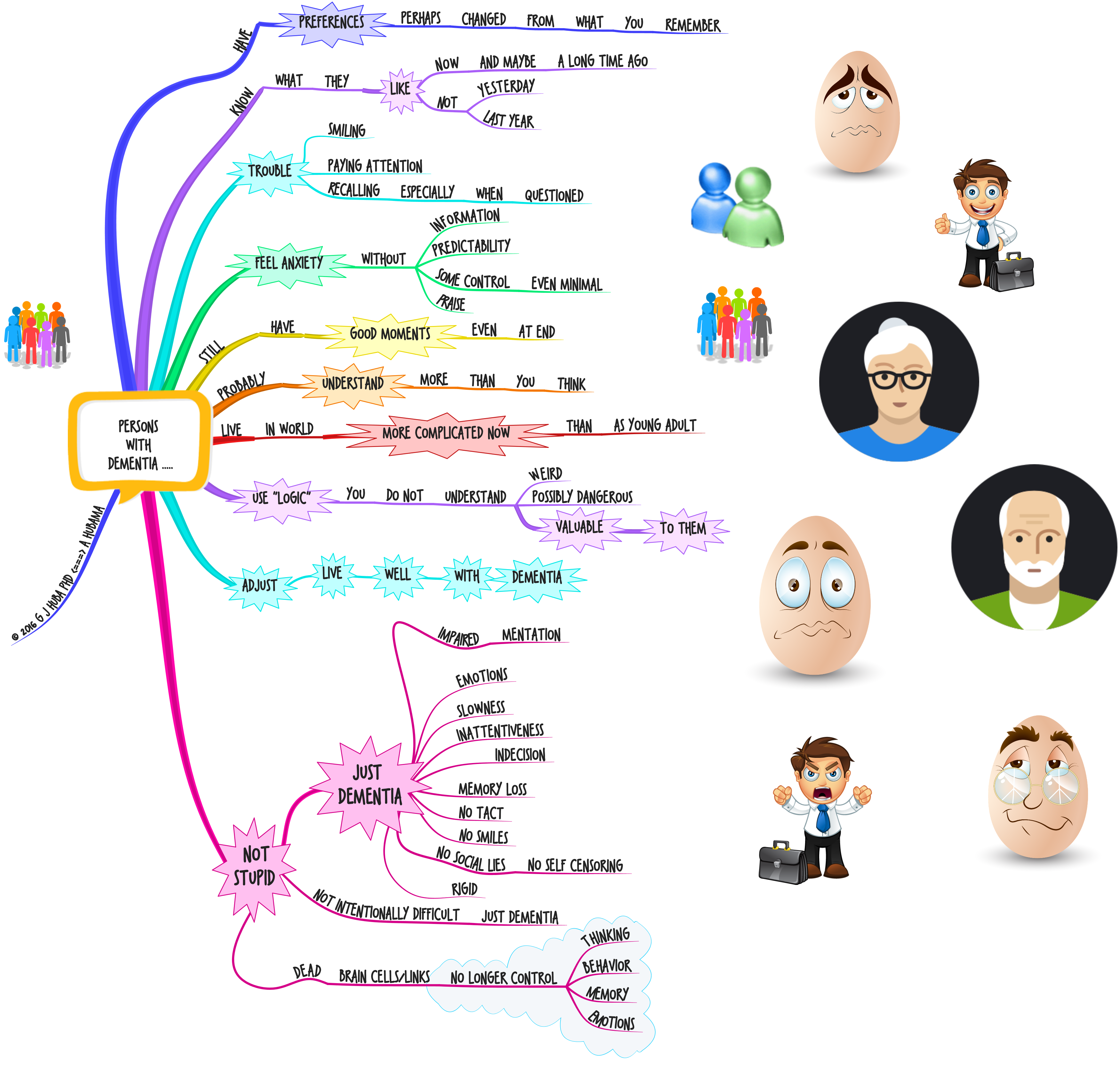 My grandfather lived to be 87. He had dementia for at least the last 10-15 years, probably longer. He never failed to light up in a smile and he never heard a baseball game on the radio (or watched on TV) that he could not understand. And heck, right until the end, he never voted for a Republican.

He wasn’t stupid, damn it. He just had dementia. But he knew which political party would treat regular guys who served in WWI fairly and in spite of battling dementia and not smiling much any more, at the age of 84 had my mother help him buy a new suit and insisted on coming to my PhD graduation. Later that day during a moment of lucidity, he told me his family had progressed from the first one to graduate from high school (him) to the first one to graduate from college and a masters’ program (my Dad), and now me. He always loved the USA and democracy above everything and was proud his family had made it in his beloved country. And to the day he died, if there was a Red Sox game on the radio, he was listening to it. And understanding it. And always rooting for any team playing the New York Yankees, something he had learned to do way back in the days when professional baseball was just starting.

Oh, and before you say that this post is too well written to have been done by someone with many cognitive deficits, take into account that I worked on it for more than a week and wrote from a number of mind maps and other diagrams. I have been thinking about these ideas for several years and I went through more than a dozen drafts, often writing just a few sentences at a time.

I adjust. Please try to adjust to that old man who bends over and looks at the sidewalk when he walks, may not care about coordinating clothing as it takes him back to his youth in the late 1960s to be uniquely dressed, and does not necessarily shave until after lunch because it is much easier to use a razor or shaver at the times of the day when his hands have less tremor.

Certainly not me or the volunteers throughout the world working hard to have dementia-friendly communities.