Part 2: Watch a Person with #Dementia Use a #MindMap to Communicate (Time Lapse Video 2)

In the previous blog post, I showed myself creating a mind map over a 39 minute period. It was a pretty smooth experience. I have dementia and my blog Hubaisms.com uses mind maps to explain my experiences. I also use mind maps to guide my day-to-day life.

As context, I have a PhD in Psychology from a highly prestigious US university, 35 years experience as a researcher and CEO of a “high-tech” management and program evaluation consulting firm I founded in 1988, and a diagnosis of neurodegenerative disease (NOT Alzheimer’s disease) made when I was 59 years old. Using extant research, it is reasonable to say that I had the condition at least as early as the age of 55 and probably earlier, especially since I began treatment with a psychiatrist (a common occurrence for those with neurodegenerative disease since the symptoms first appear psychological before later appearing neurological) at that time. I am now 64 years old. I have been considered to have been partially disabled (by my insurance company) since late mid 2009 and fully disabled by the same insurer and the US Social Security Agency when I had to retire at the age of 60 in 2011. Both the insurer and the SSA consulted with independent neurologists to confirm the diagnoses and advice of my own physicians.

Since 2010 I have used Buzan style organic mind mapping to help me communicate and plan, organize, make decisions, remember, and maintain some skills I once had. The method works FOR ME and I am quite grateful to Tony Buzan for his pioneering work that allowed me to embark on my research and trial-and-error search for some tools that would help me.

Here is a second mind mapping session I recorded about 16 hours after the first one (around 9 AM today) BEFORE taking any medication for the day. The mind map is one which is probably easier to develop under normal circumstances than the first.

As you will see in the video I had a lot of stop and start periods when I lost my place as I got caught up in thought about what I wanted to create, but I was able to continue productively as I used my prior work to regroup.

Nonetheless, I think I did a pretty job that just had a lower productivity rate (since it was an easier map to create) to complete.

The map yesterday was created in the late afternoon after I had taken several doses (morning and afternoon) of medications for attention, mood stabilization, tremor control, and cognitive functioning. The medications do not produce large effects in my cognition, but in this case they did focus my attention to some degree but have not been shown to be effective for the type of neurodegenerative disease I have and are being used off-label by my doctors (as is typically done by most doctors with a hope and prayer they will control symptoms to at least a small degree). This morning, I worked on the mind map before taking any medication for the day.

The fact that I take certain medications prescribed by a very skilled and experienced group of doctors and myself use mind mapping in conjunction with the medication does not constitute medical advice for you in any way. See your doctor if you have my problems or appear to be developing them. You are not me, you may not have the same disorder (if any), and dozen of other factors need to be considered for each individual when medications are prescribed and cognitive behavior techniques are used. Like my medications, mind mapping has not be proven to work in formal clinical trials and the fact that I have concluded that it helps greatly FOR ME, does not mean it will work for you or anyone else.

Neither the medications nor mind mapping will cure my dementia or probably slow it down. That is OK. I use both because I perceive the medications and the cognitive mapping improve my quality of life to some degree. And with dementia, even a few extra good hours or days is an incredible gift.

The video from yesterday covers a 39 minute work period. The video from today covers a 36 minute period. In both cases, I conceived of the idea and then started immediate work on it. I neither carefully planned the map before starting recording and this is the first attempt. No practice was done before turning on the recording program.

My morning dosages of medications usually leave me with a very bad headache which stops in a couple of hours. Since I had not taken medication before or during this video session, I did not have a headache.

Note that both videos use time lapse settings so that 8 minutes are portrayed as 1 minute. 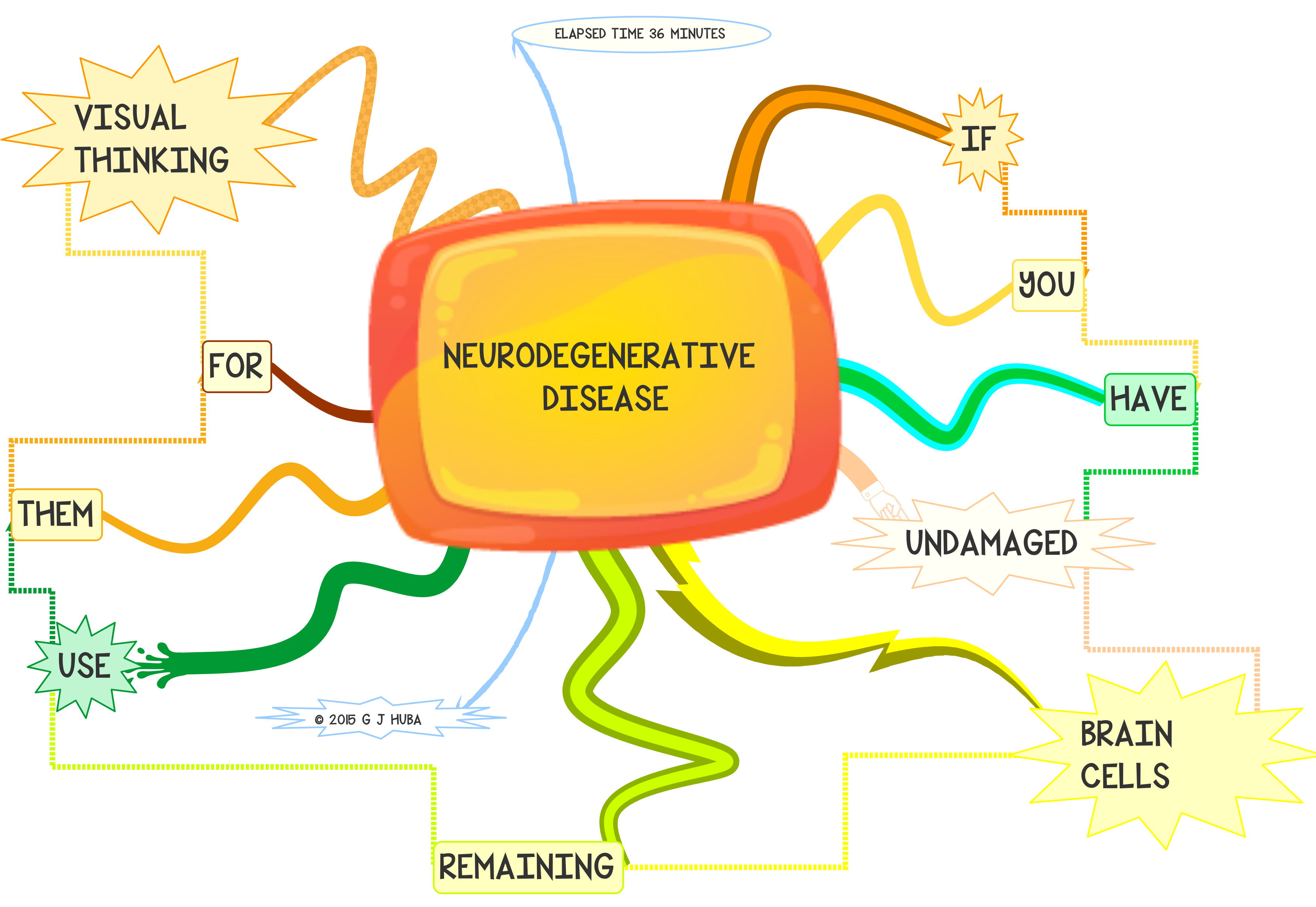