In 2009, I was searching for diagramming (that is, visual thinking) software to model information as I had been (by hand or using drafting templates) in scientific journals since the mid 1970s (using what were called path diagrams, flow charts, block diagrams and later rediscovered and called concept maps). I thought that this would be a natural application for my newly acquired iPhone (and iPad).

I found one app that could magically turn a tiny iPhone 3S screen into the biggest and best visual thinking/modeling tool in the world.

because you will understand why this is such an important app.

Then the developer did something really weird. They made their last update to the app in 2010 and never again updated the app beyond version 1.9 which simply added support for larger iPhone screens: no bug fixes (not that I had ever found a bug); no issuing of new versions as iOS evolved (not that it ever seemed that the program really needed such improvements). Over five years, I strongly recommended the app but as time went on and I thought that the app had been orphaned by the developer, I recommended it less strongly and looked for evolving apps that might be better. I never found one that would better support visual thinking on a tiny iPhone screen or that used the advantages of computer-assisted diagramming better on the touchscreen of the iPad (and iPhone).

I was shocked a week ago when a NEW version (2.0) magically appeared on my iPhone and iPad after FIVE YEARS. I was even more shocked that in an age of adding way too many bells and whistles they did not screw anything up with the update — just some better use of the evolving operating system and screen technology of the iDevices.

For active thinking and model building there is nothing better. Yes, a “bigger brother app” like my favorite for mind mapping (iMindMap) can do much more and with far greater artistic and design tools than Instaviz. You take notes on Instaviz on your iPhone and draw a rough out diagram while sitting in a coffee shop or transportation or a doctor’s office or during a commercial break. Then you take it to iMindMap or a similar program and embellish, expand, and refine it with the additional tools of extremely advanced visual thinking.

This is the best simple visual thinking or simple diagramming or “Back of the Napkin thinking” app available for the iPhone and iPad. And, unlike the napkin you draw on at lunch, diagrams from the program can look good enough to use in books and professional journals without further enhancements. And unlike the napkins I have been known to scan and post occasionally in this blog, the diagrams from Instaviz come without ink smears, coffee cup rings, and grease stains from errant French fries, freedom fries, chips, British fish and chips, sweet potato fries, tempura, or pizza.

Virtually every diagram I ever published in over 250 articles and books between 1972 and 2010 (with the exception of those I produce in iMindMap) could have been developed with Instaviz on an iPhone 3S. Think about that. And, they would have looked better than those drawn by professional artists for $100s (or $1000s if you added UCLA overhead) a diagram in mid-1970s dollars! Think about that.

Instaviz. Stop whining about paying $7.99 to purchase the app or face extinction like the other dinosaurs. Your choice.

By the way, Instaviz was developed from the well known open source software Graphviz that originated from Bell Labs a half century ago. 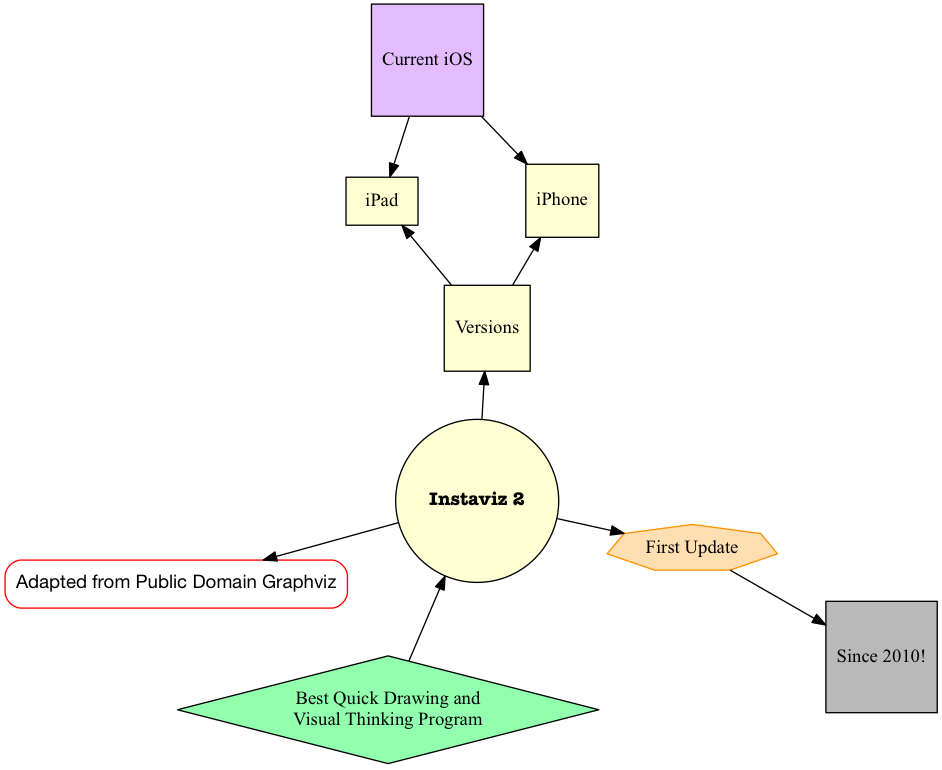 And here is a “real” application that was easy to generate in about 15 minutes while I learned some updated syntax and little tricks.

The path through the diagram is a map of where I have lived during the first 64 years of my life. It starts with 1951 in the Bronx and progresses through my Dad’s on-the-job training with nuclear reactors in Tennessee, back to the Bronx for a few years of living across the street from the Bronx zoo on Bronx Park South boulevard. From my 5th floor bedroom window you could see into the lion pit; from the 6th floor roof you could see much of the outside animal enclosures. On to Western Massachusetts for school from grade 1 to 11, Lafayette College in Easton for my senior year of high school (first year of college), and back to the Bronx for college at Fordham. Off to New Haven for grad school, and on to the University of Minnesota and a year later UCLA. After decades in the western portion of Los Angeles County, I moved to the small university town charm of Chapel Hill. 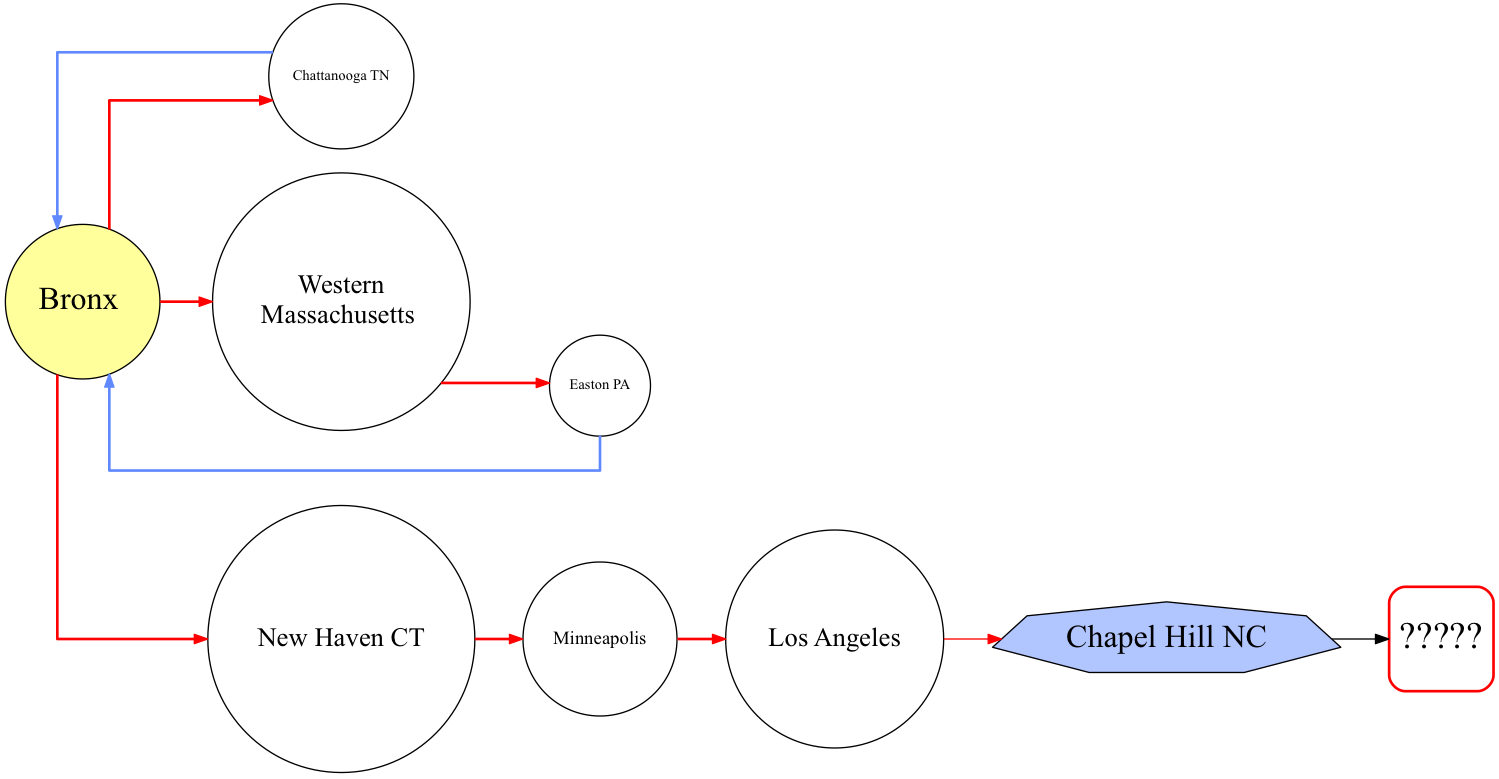 This app is always on my iPhone and iPad and gets used several times a day when I want to draft a simple diagram. And now that is being supported again as the iDevice platform becomes more sophisticated, I can go back to recommending this as one of the dozen or so iPhone apps everyone must own.