The style guidelines given in this post are specifically for Buzan-type organic mind mapping. Only the program by the ThinkBuzan organization — iMindMap — can adequately produce such mind maps with complete and flexible formatting at this time. These examples were drawn in iMindMap (for Mac, the PC version is comparable; the tablet and smartphone versions of this program do not allow full control over all of the style elements I use). The iMindMap program comes with several dozen included style sheets and the ability to create your own custom styles. When I first started using the current iterations of the program back in 2010 and through the present time, I have always tried many of my mind maps in many of the available style sheets. The included style sheets yield pleasing results with colors selected from standard pallets and the fonts the developer uses are found on 95% of all Macs and PCs. The color sets are combined with different font sets and variables that control the “curviness” of the lines and their thickness. All in all, the style sheets are well designed options appropriate for a variety of applications. Beginning and intermediate users will find these immediately useful and the predesigned styles are all most users will ever need. Up until mid 2014 I used the standard style sheets of iMindMap with various custom alterations I would enter ( a few different fonts usually of a larger size, small modifications to the color sets, and moving the lines around to custom locations manually often tweaking the curvatures at the same time). While I was writing my book (Mind Mapping, Cognitive Impairment, and Dementia), I started to reformat a lot of older mind maps while I was also updating their content. I found myself moving toward more of what I considered to be a “dementia friendly” format. For example, I started using colors in the yellow-orange-red range where elders retain more of their color vision which also correspond to the “earth color scheme” of the 1970s when most of those currently retiring were in their 20s or 30s establishing families and careers and early adult memories. The fonts were changed to “clunky” and unique ones and paired with fatter branches, and much larger font sizes for the size of the branches. I implemented changes to the formatting on most of the mind maps in my book but made a decision to not invest too much time in revising the 1000+ maps on my blog rather than creating new maps. I have been using my own revised set of style recommendations on new blog posts since late 2014. I have also gone back and changed some of the more important older ones. My style suggestions are based on both my fairly systematic study of matching possible styles with the content and complexity of mind maps as well as the fact that I have dementia. So far as I know, at this time the only “scientific” support for these style selections is based on my study of myself and my reactions to various styles. I am not arguing that I know these principles work. Rather I am arguing from the standpoint of someone with dementia that these principles seem to work best for ME. I do note that color I think is the best overall is the same one (safety orange and yellowish variations) that appears on virtually all caution signs and at the edges of roads in the USA. [I did not recognize the relationship between my preferred color and street markings until several months after making the selection.] Colors used every day to convey information to people visually are probably best for informing people with dementia. After all, in the 48 years since I started driving, I have been reliant on the color orange to tell me where the middle and sides of the road are as well as where accidents are likely to happen for AT LEAST an average of one hour per day when I am behind the wheel. The same colors tell a pilot where to land the plane and a child where to walk when crossing the street. Click the images to expand them.

The next mind map uses the same general style sheet as the preceding map.

The way I “discovered” the utility of orange and variants for mind mapping was in developing hand drawn maps. I usually hand draw maps with a fountain pen and I keep a number of pens filled with different inks in my bag to use while sitting at lunch or in the car or else where. Looking back on my hand drawn maps, I realized that I was most frequently select orange as the color to draft a map in. Then I looked at my fountain pen ink collection and realized the large number of orange, orange-yellow, orange-red, and orange-brown inks in it that I had purchased in search of the perfect orange (inks with such names as Apache Sunset, Noodler’s Habanero, Noodler’s Cayenne, Indien Orange, Ocher Yellow, Burned Sienna, Mahatma Gandhi Saffron, ambers of various kinds, several cocoa colored inks, Sunrise Yellow, Autumn Oak, and Operation Overload Orange (the color used to send letters to Eisenhower’s army during the Allied Invasion of Europe). A recent hand drawn first draft of a mind map is shown below. Since I drew this in about 10 minutes at lunch and immediately went back to my office and started enhancing it on the computer, I did not bother to make the branches different colors or add sketched images. But as with everything else I have done lately, I sense that orange is the correct color to use for “creative” thinking. 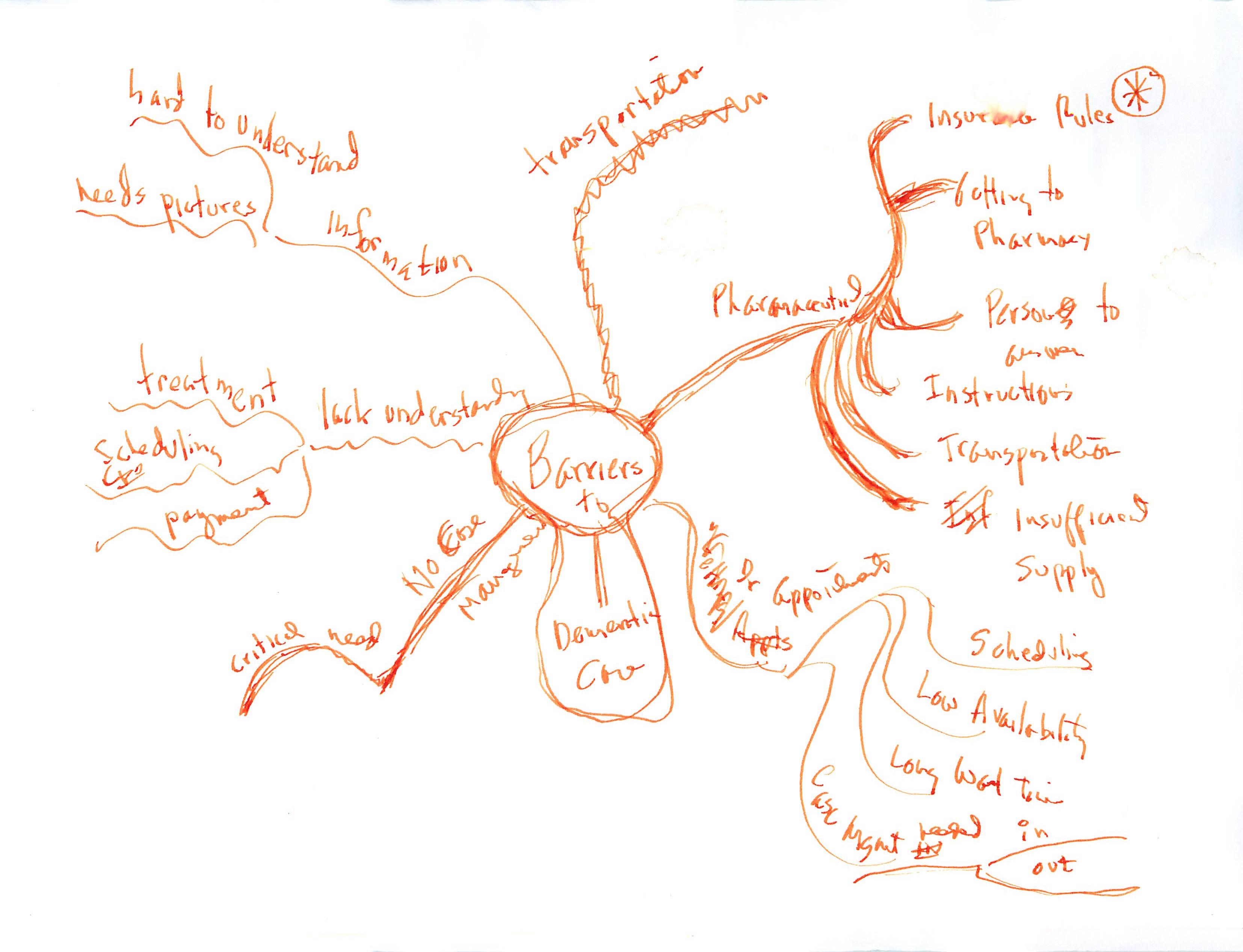